The Porcini mushrooms, as it is known in Italy, is more commonly known as cèpes in the French culinary world, and the Penny Bun in America (it is never called Penny Buns in the UK). It’s scientific name is the Boletus edulis, and it is part of the Basidiomycete group of fungus, the fungi group with contains the majority of edible mushrooms. As the name implies, ‘edilus’ in latin simply means that it is edible. In italian, the word Porcini can roughly be translated to “baby piglets”. Like all members of the Basidiomycete group, the fungus lives underground by growing mycelium. Mycelium are long white strains that grow outwards in search of nutrient in the soil. Along the way, the hyphae (branches of Mycelium) secrete enzymes to digest the nutrients in the soil, before absorbing it back in. The actually Porcini mushroom that sticks out of the ground, is actually the fruiting body of the fungus, with its sole purpose being to spread its spores. Armed with this information, when harvesting Porcini mushrooms, hold the stem of the mushroom as close to ground level as possible before twisting gently to break the hyphae. Do not pull the mushroom as this will damage the underground mycelium, while cutting the mushroom with a knife will cause the remaining part of the mushroom to rot, thus also harming the mycelium. 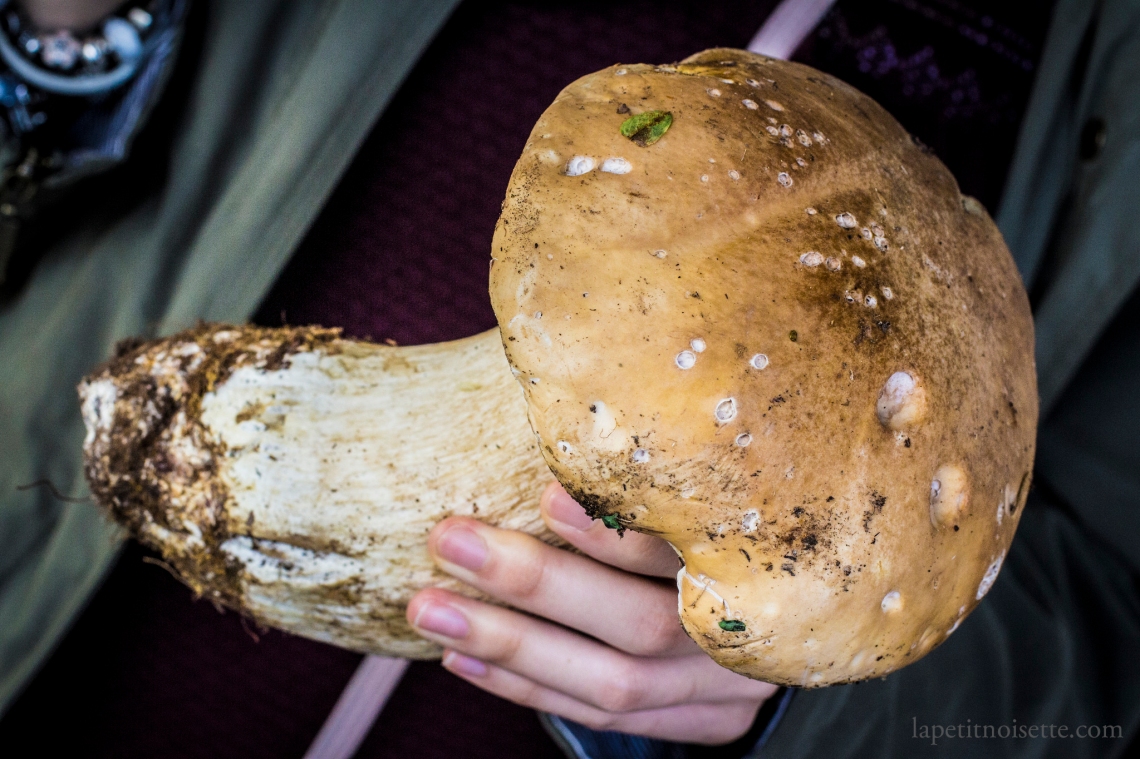 Another key point to remember when gathering porcini mushrooms from the wild is that they should have a prominent white reticulum (veins) on their stem. If they instead have a pinkish reticulum, they are most probably the closely related Bitter Bolete, which while harmless, are extremely bitter and will ruin an entire dish. Along with this, remember that any Porcini mushrooms that have a red underside or a blue-ish thinge should not be taken as they are most likely poisonous.

Like all other mushrooms, it is preferable to clean them with a mushroom brush or a damn cloth. Never soak or wash them in water as they are water permeable and will soak up water very quickly, diluting the flavour and causing your mushrooms to go soggy. If the mushrooms are extremely dirty, it is still acceptable to quickly rinse the mushroom in cold water. To prepare fresh Porcini mushrooms, I usually scrape any grit and dirt from the mushroom before slicing them length wise. If the mushroom are fairly large and old, I sometimes also peel them to remove their tough outer coating.

Tajarin is a type of egg pasta that is traditional in the Piedmont region of Italy. It is similar to tagliatelle but thinner (~3mm). Both tagliatelle and tajarin are made from the same recipe which contains semolina flour, salt and eggs. However, they not only differ in place of origin, they also differ in uses. Tajarin, with its thinner width, is better suited for light sauces and delicate flavours such has white sauces and mushroom sauces. Conversely, tagliatelle with its high surface area, is more suited to heavy meat sauces such as a ragu. This being said, tajarin can also be found to be served with meat sauces in Piedmont.

This dish consists of sautéed Porcini mushrooms in garlic and butter, served with fresh Tajarin and a sauce of Nepitella and reduced Porcini stock.

This dish is not a traditional Italian dish as it consist of a mix of Piedmont and Tuscan influrence. The use of Nepitella is widespread in the Tuscan region and is the classic accompaniment for Porcini mushrooms. In contrast to this, the use of Tajarin comes from the Piedmont region, and is rarely found in Tuscany. To me the thin texture of tajarin works better with this sauce, thus explaining my choice in blending the two styles.

Nepitella, also known as wild calamint, is an aromatic herb which is common is Tuscany. It is rarely used in most of the english speaking world, but is a common ingredient in autumn and winter dishes, especially in Florence. In my opinion, Nepitella characterises Italian cooking extremely well, as it’s taste is not only fresh and sharp, but has the flavour combination of oregano, mint and basil, three of the most common herbs found in italian cooking. This of course is just a description, and the flavour of nepitella itself is unique and somewhat on the floral side. A little nepitella goes a long way and should be adding to dishes with care.