Kinmedai ( 金目鯛) is a premium fish that we serve in our restaurant. It’s name literally translates to golden eyed sea bream even though it is not in the same family as bream fish. Its scientific name is Splendid alfonsino, and is characterised by its large eyes. This is due to its preference for living in deep waters, typically below 400 metres. It is in season during the winter, whilst it has accumulated the most fat, but is still served in our restaurant all the way through early summer as sashimi and nigiri. It is categorised as a Shiromi (しろみ/白身) or white fleshed fish. It does however, have significantly more fat compared to Hirame or Tai and is therefore much more flavourful. It is typically served with the skin on, and it either seared with a blowtorch or splashed with water in order to soften the skin.

At our restaurant we never blowtorch (aburi/炙り) our Kinmedai as we feel that the smell of gas fumes can be imparted onto the fish. Instead we either lightly grill it under a charcoal grill or use a technique called Kawasimozukuri (かわしもずくり/皮霜造り), more commonly known as Yubiki (湯引き), where boiling hot water is splashed on the fish before the fish is quickly chilled in ice. 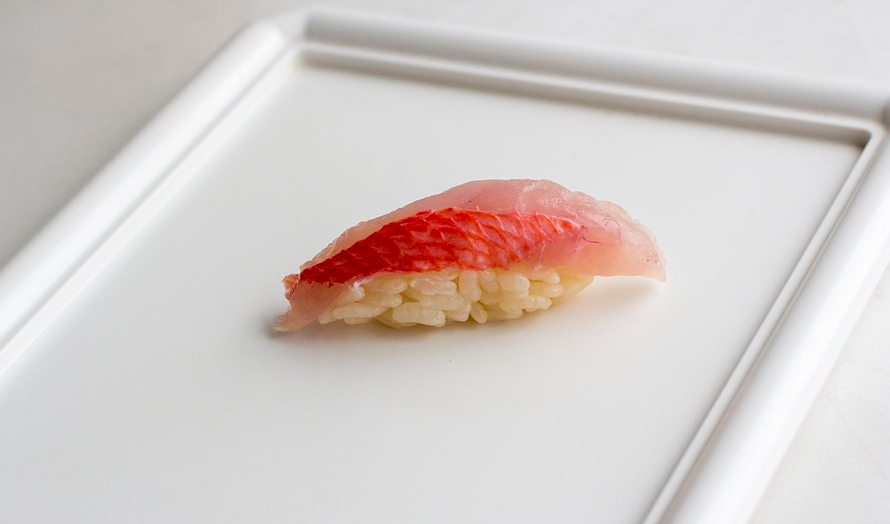 After being dispatched using the ikejime technique, our Kinmedai is cleaned and aged for a minimum of three days before we serve it to the customers. The ageing allows the fish’s natural enzymes to breakdown the the proteins in the flesh, increasing the flavour and texture of the fish. To find out more on the science of ageing fish, read this article here.

Before ageing, the fish must be well cleaned and as much blood as possible should be removed. This allows the fish to age without going rancid. Furthermore, we do not remove the head of fish that we age as we do not want to expose any flesh at all. We insert paper towels into the stomach cavity and head cavity of the fish after the guts and gills have been removed in order to absorb any moisture during ageing. After preparation, the fish is stored in a plastic bag. All the air from the plastic bag is sucked out manually before the fish is stored in the fridge. Alternatively, use a vacuum pack machine. 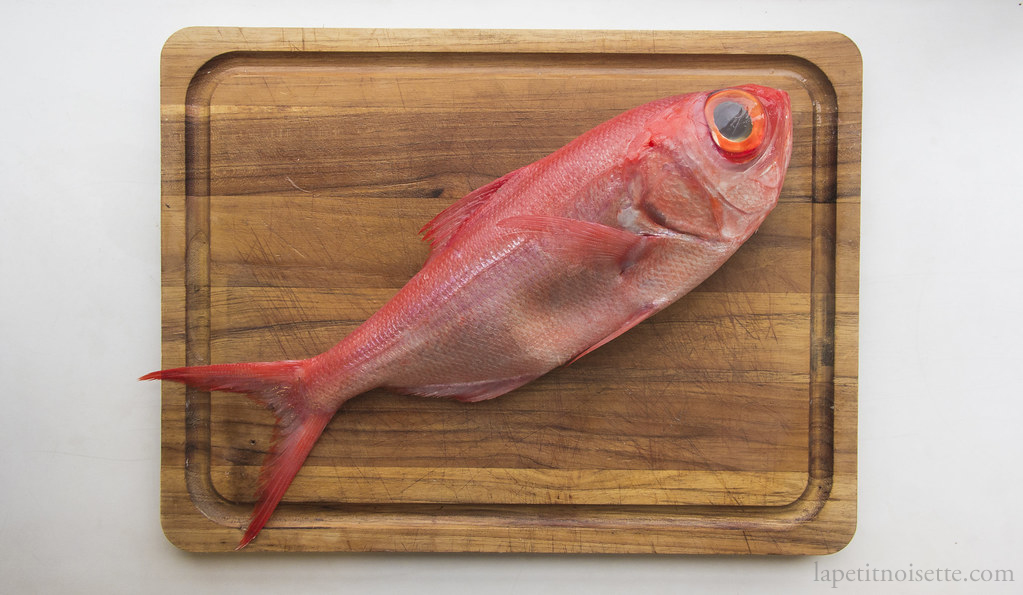 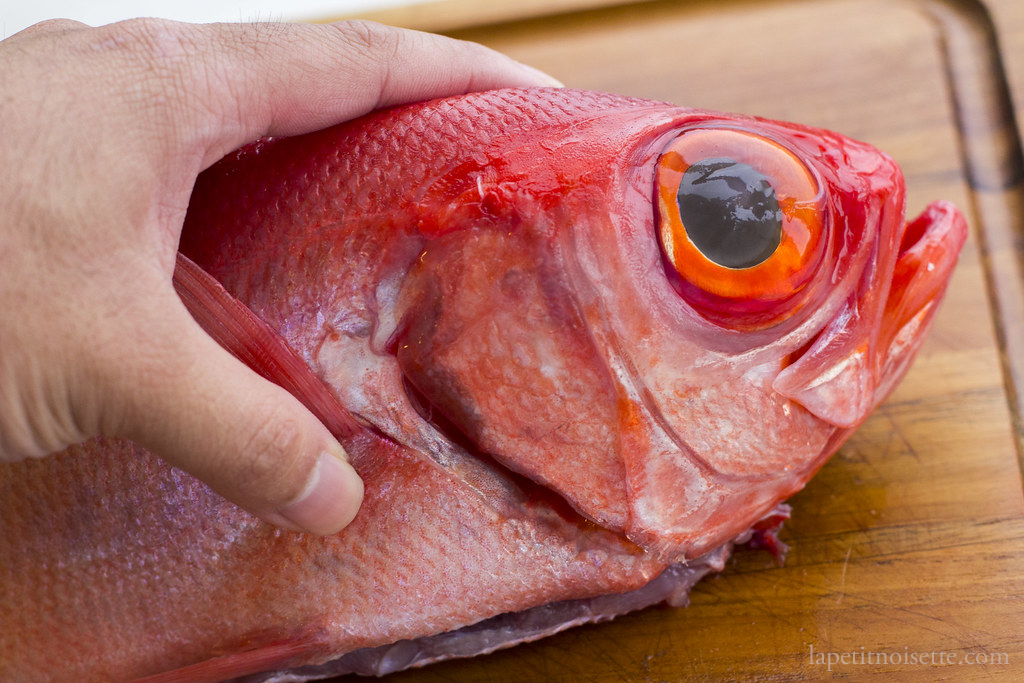 The cavity of the fish will look dirty when the intestines and gills are removed. 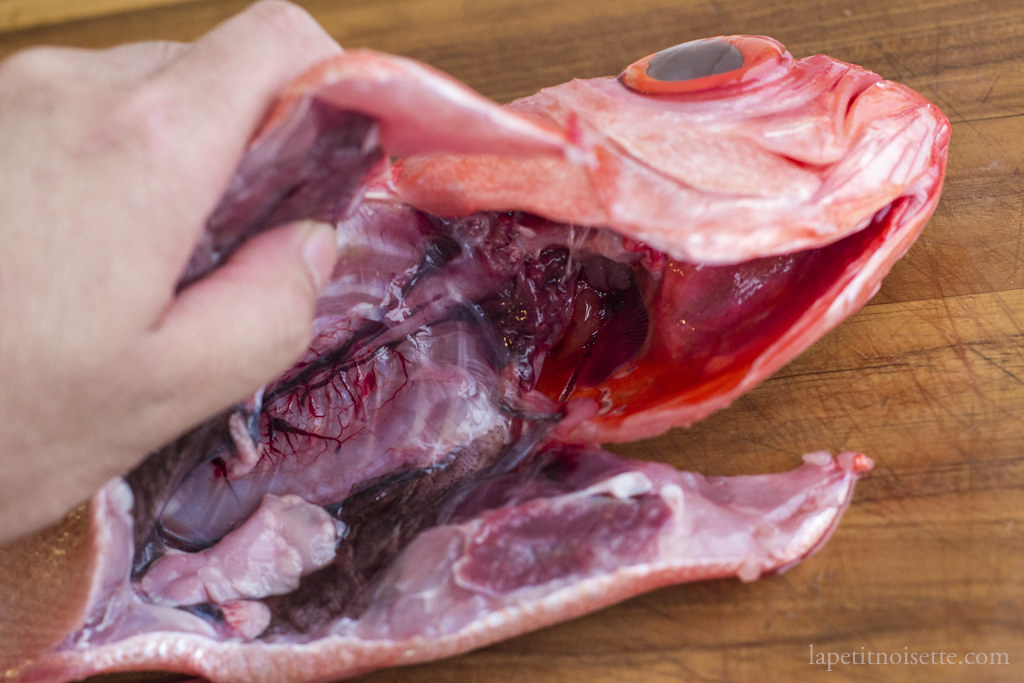 Clean the cavity of any excess blood and scum using an old tooth brush the brush away the dirt. The fish should look as clean below. 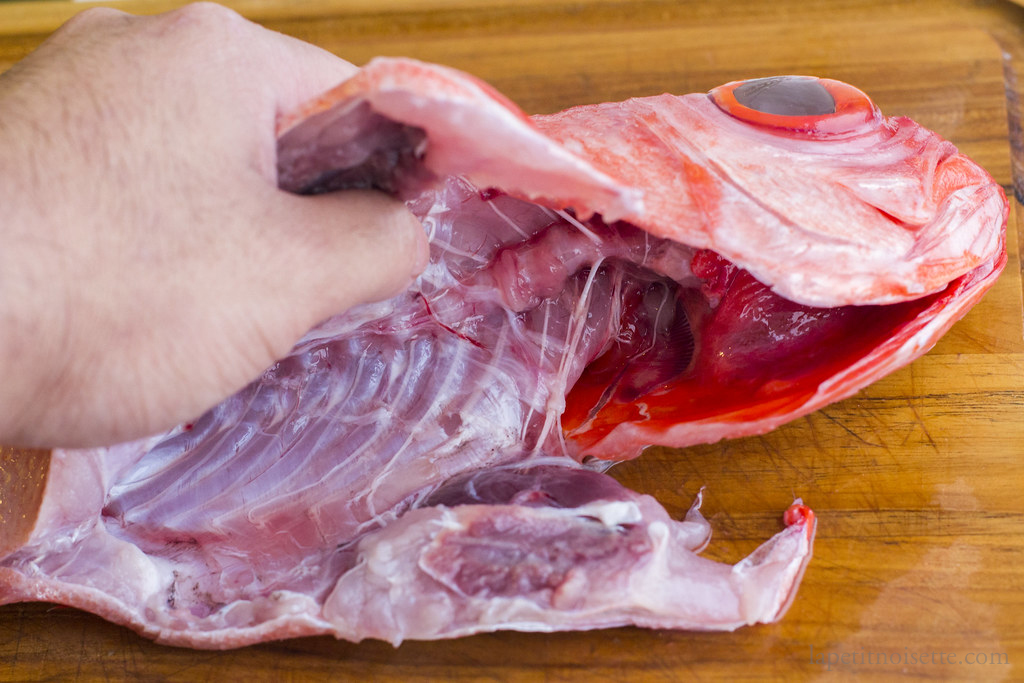 Insert fish paper (Magu roll) or paper towels into the stomach cavity and head cavity of the fish. This is to absorb any excess blood or moisture from inside the fish.

Place the fish inside a plastic bag and suck all the air out from the plastic bag. Tie a knot to seal the bag and then place in the fridge. Alternatively, use a vacuum pack machine set at 80 to 90% vacuum. This prevents the fish from oxidising and is extremely important for ageing.

After ageing for three days, the fish is ready to be used.

After ageing, remove the fish from the bag and lay flat on a chopping board. Remove the paper towels and break the rib bones of the fish.

Continue filleting the fish by slowly cutting the flesh of the fish starting from the back on the fish. Cut in long singular motions, angling the blade towards the bones to reduce wastage. 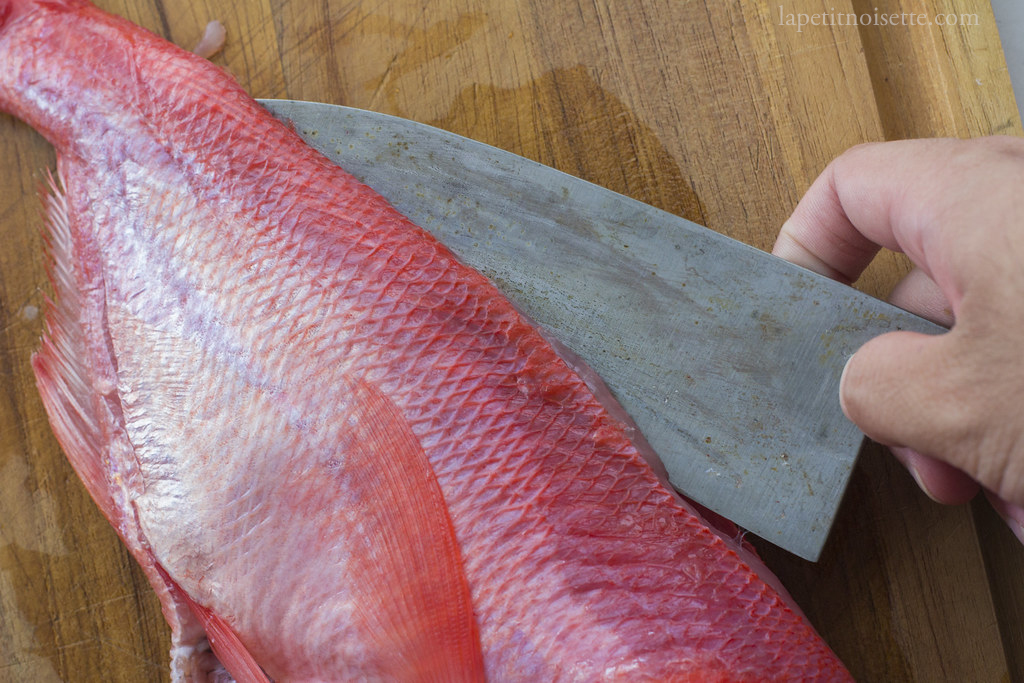 Continue the same cutting motion until the fillet can be removed entirely. Flip the knife over gently release the end of the ribs from the fillet. 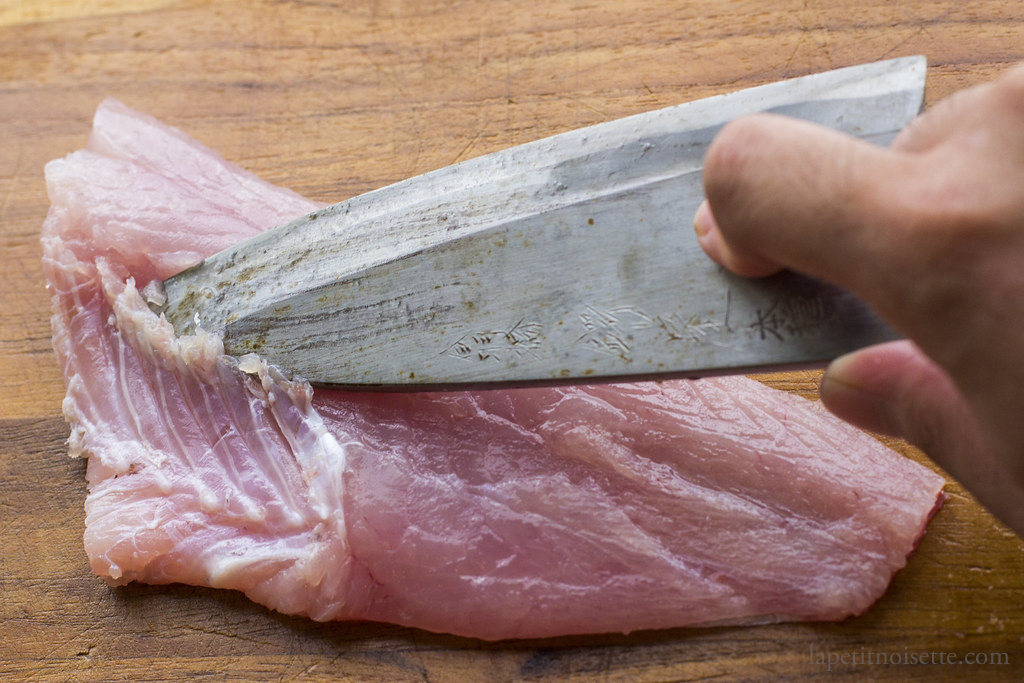 After 25 minutes, wash the fillet as well as the colander, removing as much salt as possible. Place the fillet back on the colander skin side up and cover with a paper towel.

Using boiling water, quickly pour boiling water over the entire skin surface of the fish before quickly submerging the fish in an ice bath. This technique is known as Kawasimozukuri (かわしもずくり/皮霜造り) and it helps to soften the skin, allowing it to be edible. Alternatively, using tap water is enough to cool the skin down instead of an ice bath during winter, when the tap water is extremely cold. 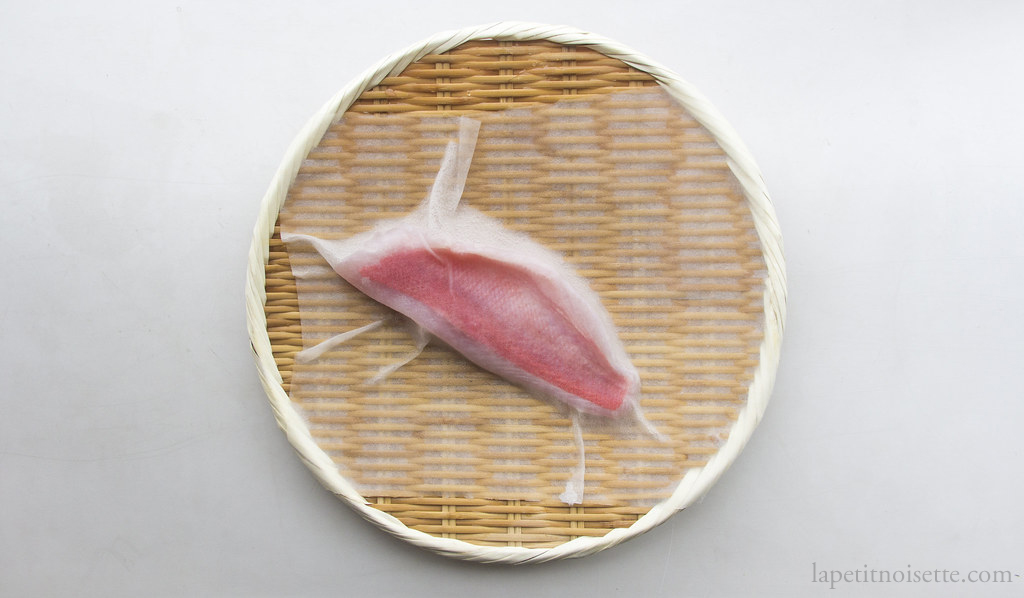 The fillet is now ready to be used for nigiri and will typically be stored in a tane box.

Alternatively, the Kawasimozukuri (かわしもずくり/皮霜造り) technique can be skipped if you intend to blowtorch the skin. If so, after salting, the fillet can be stored in a tane box. Ensure your knife is sharp when cutting the skin to ensure even cutting. Blowtorch the skin after shaping the nigiri without burning the rice.