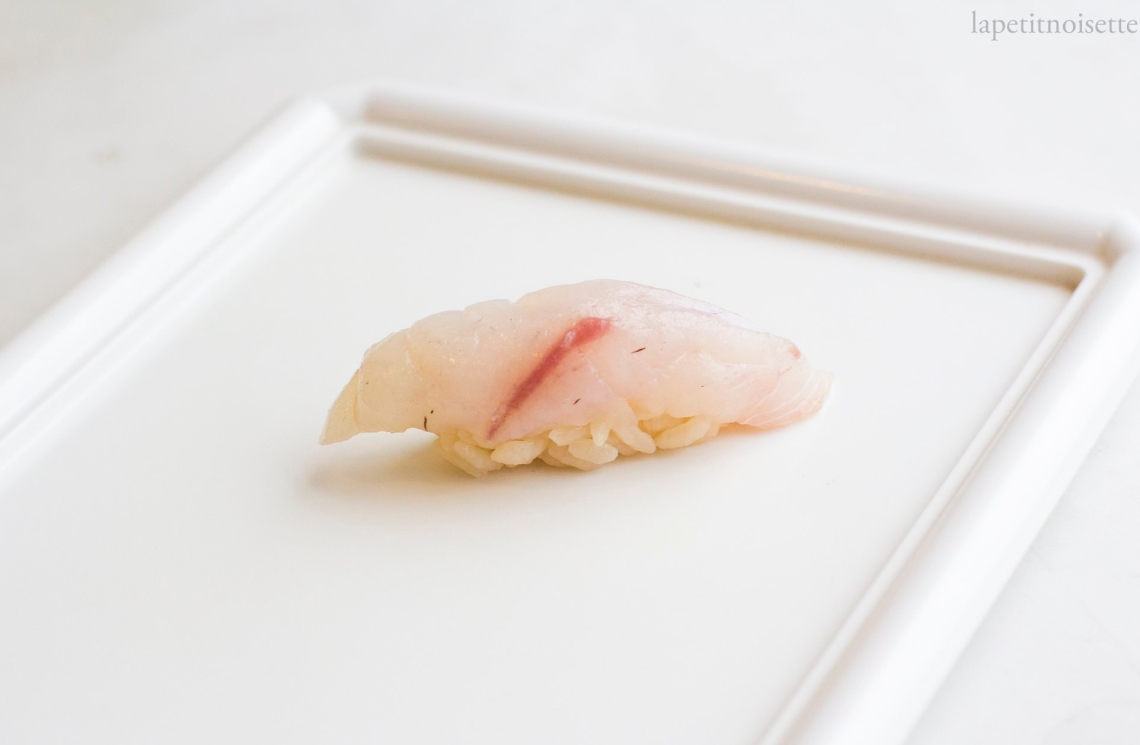 The Bartail Flathead, is a luxury fish that has traditionally been eaten in Japan since the Edo period. As a traditional Edomae fish, it also goes by many names, and is sometimes known as the summer blowfish. Its other names include the Cow tail fish, True Gochi (magochi/ マゴチ), or Kochi ( コチ). The kanji character commonly used for this fish is 鯒,but another character 鮲 is also sometimes used.

There is surprisingly little information on this fish in english available, and it’s actually species classification is not clear, it has however, been clearly places in the Platycephalus. It is classified as a white fleshed fish (shiromi/白身) and is in season during the summer. Interestingly enough, the Gochi fish changes sex as it grows, starting of as a male until it is around two years old, before changing to female. Most females are above 40cm in length at that age.

This fish is one of the more labour intensive fish to prepare due to it’s extremely thick skin. The scales of the fish are also small and tough and are thus usually removed with steel wool instead of the typical fish scaler. The skin of the fish is also hard to remove. At the restaurant, we pull the skin off the fish using our bare hands alone. The fishmonger that supplies our restaurant actually prefers to nail the tail of the fish to the chopping board using a meuchi (目打ち), before pulling the skin off the fish. Alternatively, the skin can be removed using the classical method, which is by sliding a knife underneath as shown in the example here. 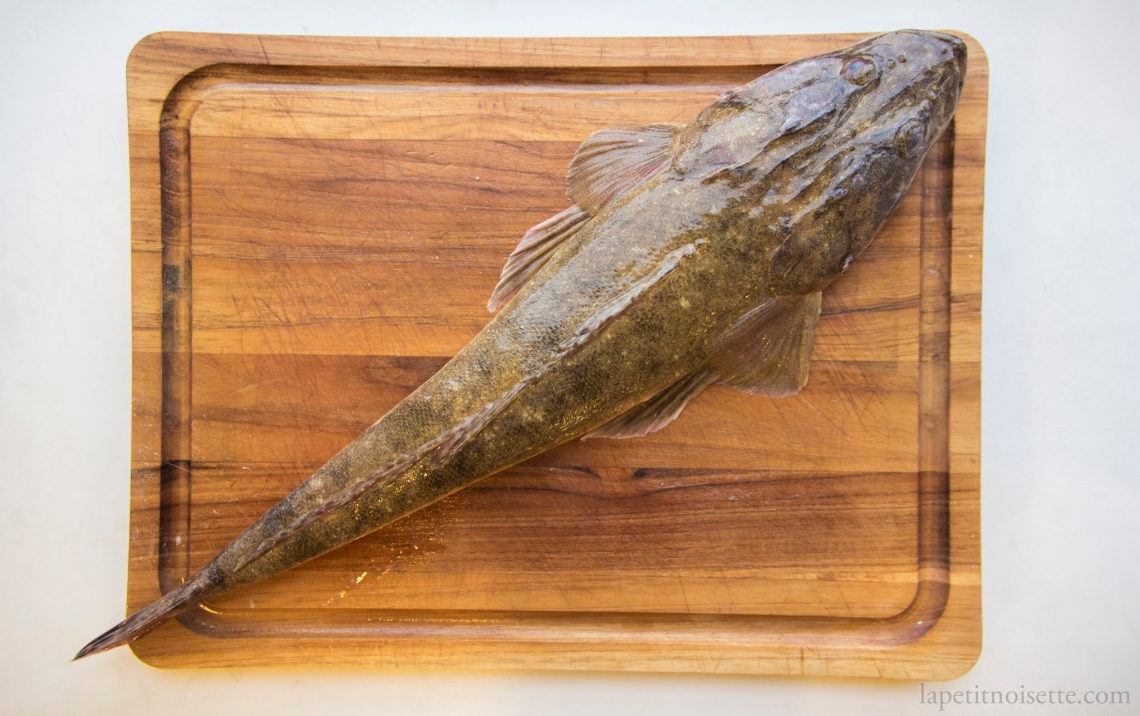 First, cut any sharp fins, such as the dorsal fin, off using a scissors.

Descale the fish using a steel wool or fish scaler. If using a fish scaler you might need to scape the fish quite hard as the scales are hard to remove. Run the scaler against the direction of scale growth to most efficiently remove them. Wash away the scales and slime with cold water. Whilst descaling, we run a small stream of cold water onto the fish from the tap to prevent any scales from flying about.

Remove the head of the fish by cutting under the head just behind the pectoral fin.

Repeat on both sides of the fish’s head before cutting through the spine and removing the head. 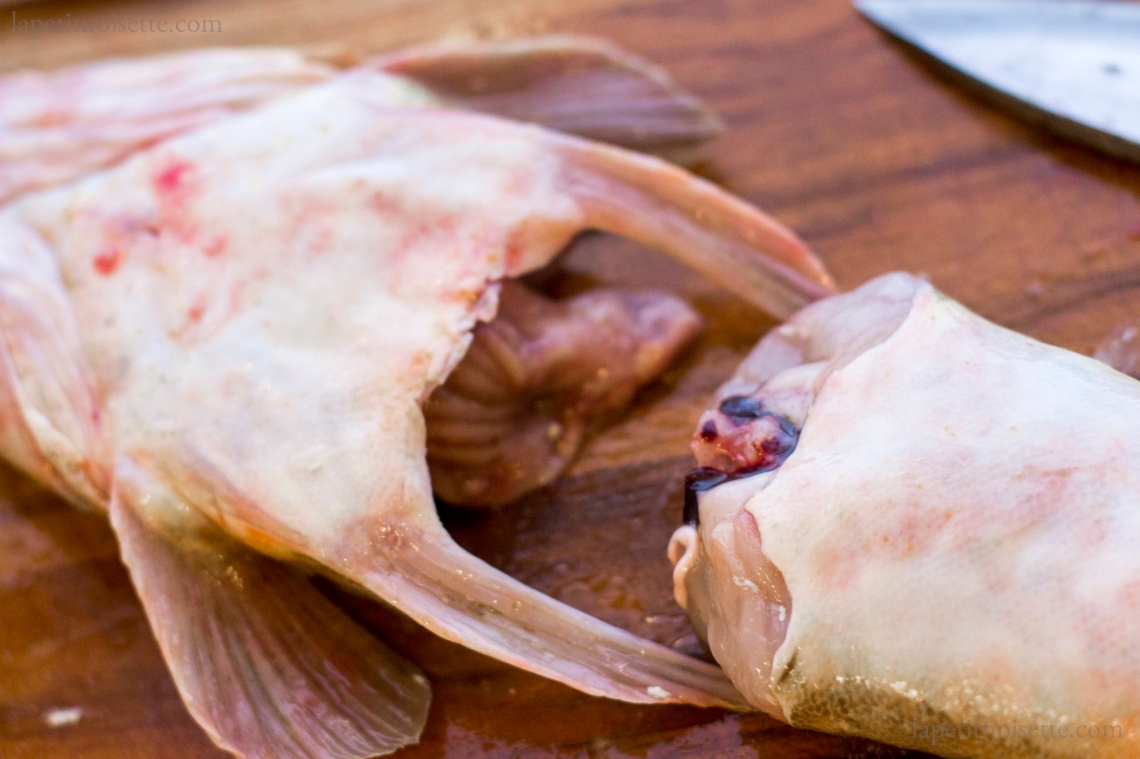 Make a cut down the belly of the fish and remove the innards.

Wash and clean the inside of the belly cavity.

Starting inside the belly cavity, break the rib bones of the fish and follow the cut all the way down to the tail.

Release the tip of the rib bones from the flesh by flipping you knife upside down and running it under the bones.

Turn the knife back round and gently cut away the rib bones.

Repeat for the other side of the fish to extract two fillets.

Allow to rest for 20 to 25 minutes depending on the size. During that time, remove the pin bones of the fish.

Wash off the salt and place the fillets skin side down on a chopping board.

Remove the skin off the fillets by making a small cut underneath the tail of the fillet between the flesh and skin. Start by cutting into the flesh and stopping just at the skin. When the blade just touches the skin, using a sawing motion to gently separate the fresh from the skin whilst angling the blade until it is flat.

Continue the cutting motion until all the skin has been removed from the flesh. If the skin breaks halfway, don’t worry and start from the other end of the fillet.

Using a paper towel to grip the skin of the fish allows you to have a more stable hold on the fillet, making it easier to cut.