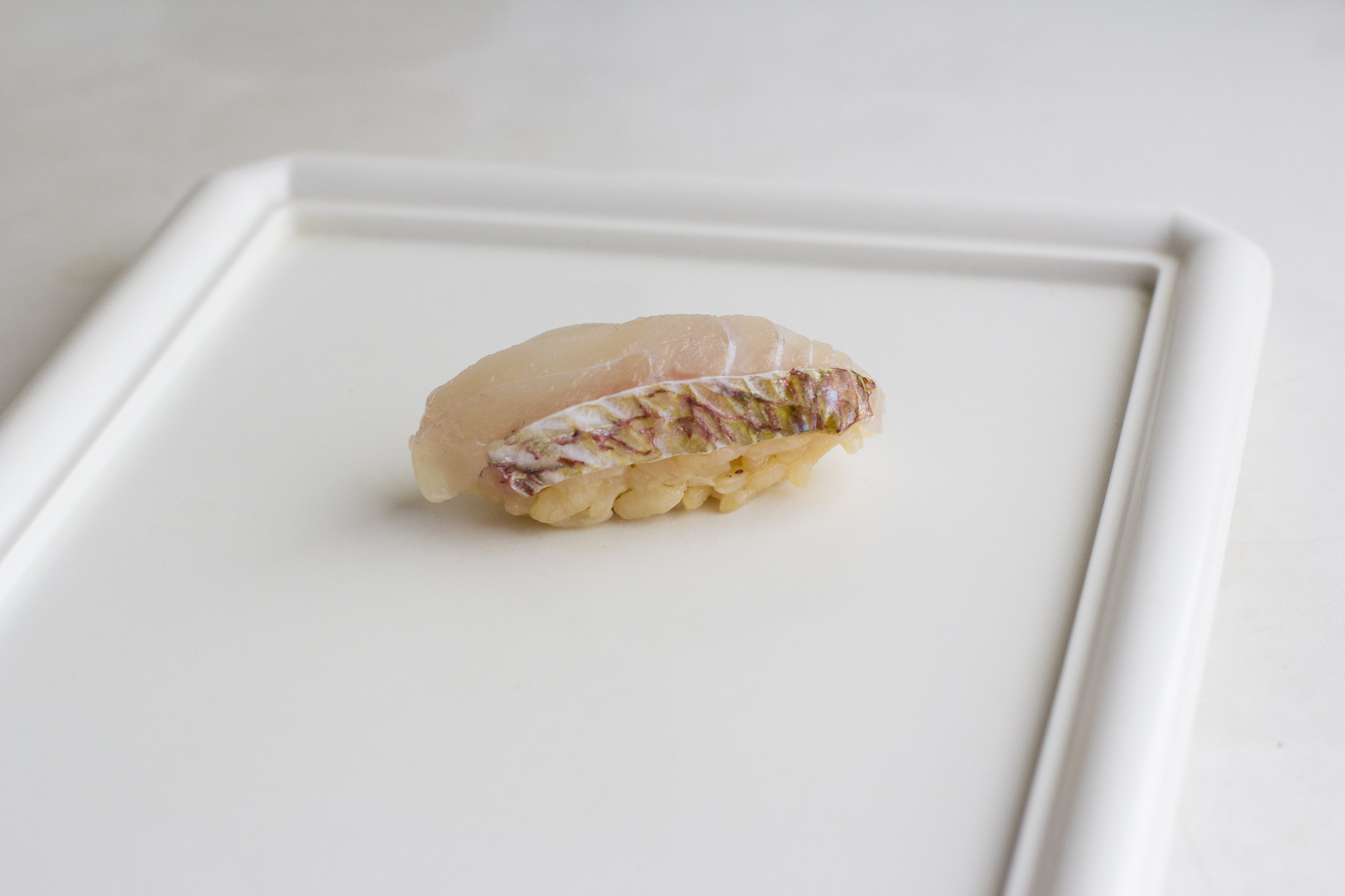 One of the classics of Edomae-sushi, Tai or sea bream, can be said to be one of the tastiest of white flesh fish (Shiromi/白身). Compared to similar white flesh fishes just as Hirame or Suzuki, Tai is considerably cheaper as it’s catch it bountiful. However, good quality Tai can be extremely expensive.

The word Tai in Japanese encompasses many different species of bream in Japan actually, such as Madai (真鯛), or red snapper (Pagrus major). When talking about Tai alone in Japan, it can be generally assumed that you are talking about Japanese Bream or Paracaesio caerulea. The majority of Tai found in Japan nowadays are farmed. Whilst farmed Tai has more fat compared to wild Tai, the lack of exercise means that the fat is mostly tasteless, with the muscle also being tasteless due to the lack of exercise. 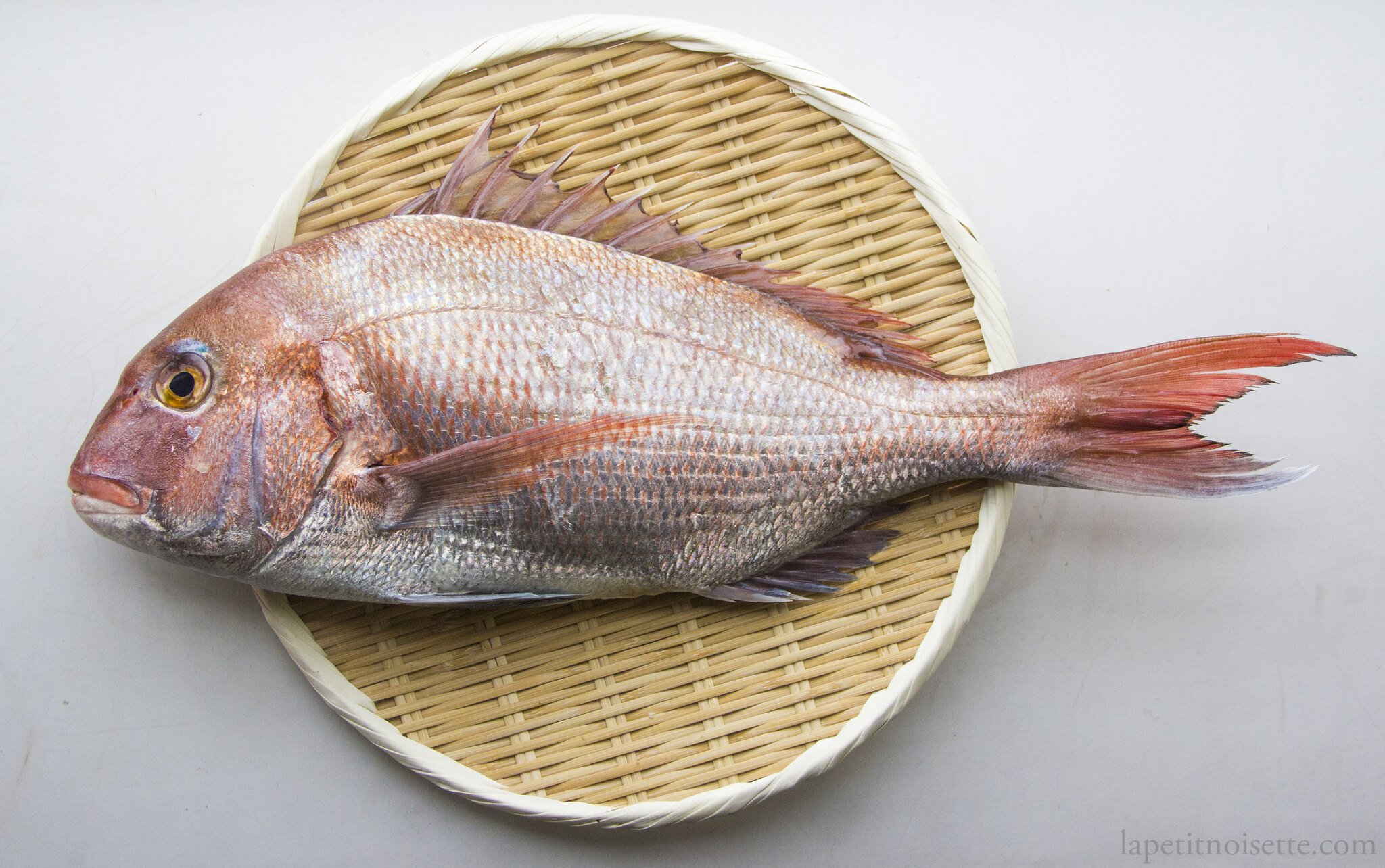 Whilst working at the restaurant, my master would always judge the quality of the Tai from it’s bone structure and scales. The smaller the scales on the fish, the faster the currents in which the fish swam. High quality wild caught Tai was extremely expensive and rare. The taste however, was unbelievably melt in your mouth tasty. It was very hard to find, unlike the Tai which you would see alive in the fish tanks at the markets. We specifically requested that our Tai were killed using the Ikejime method immediately, allowing us to age it to further improve the texture.

In terms of bone structure, farmed Tai has a weak bone structure from lack of use. The highest quality Tai that swam in the fastest waters had a kind of bone deformation in it’s rib bones, not unlike bone cancer growth. When I first saw it, I thought that the fish might have had a disease or maybe it was an exception. This however, was not the case. Maybe excessive use of the bone structure there in order to swim against the currents cause the bone to grow additional reinforcement. These bones were called Naruto bones (鳴門骨/なるとほね) by our suppliers. You can find out more about this here. 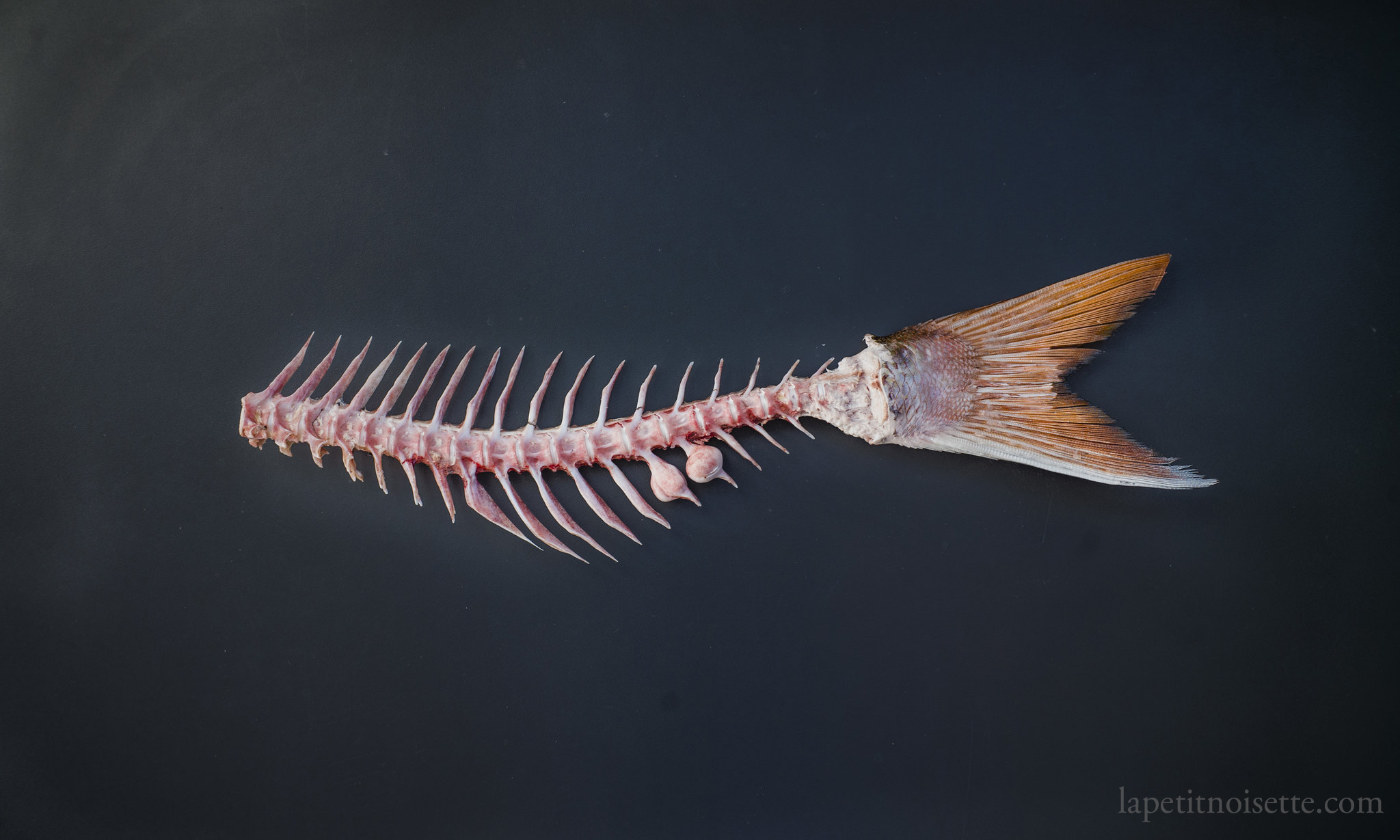 Whilst Tai is considered a white fleshed fish, in its baby form, Kasugo, it is considered a silver skinned fish and therefore marinated in vinegar. Tai is also very suitable to be aged using the Kombujime technique as larger specimens can withstand the additional flavour of Kombu.

At our restaurant we never blowtorch (aburi/炙り) our Tai as we feel that the smell of gas fumes can be imparted onto the fish. Instead we either lightly grill it under a charcoal grill or use a technique called Kawasimozukuri (かわしもずくり/皮霜造り), more commonly known as Yubiki (湯引き), where boiling hot water is splashed on the fish before the fish is quickly chilled in ice. 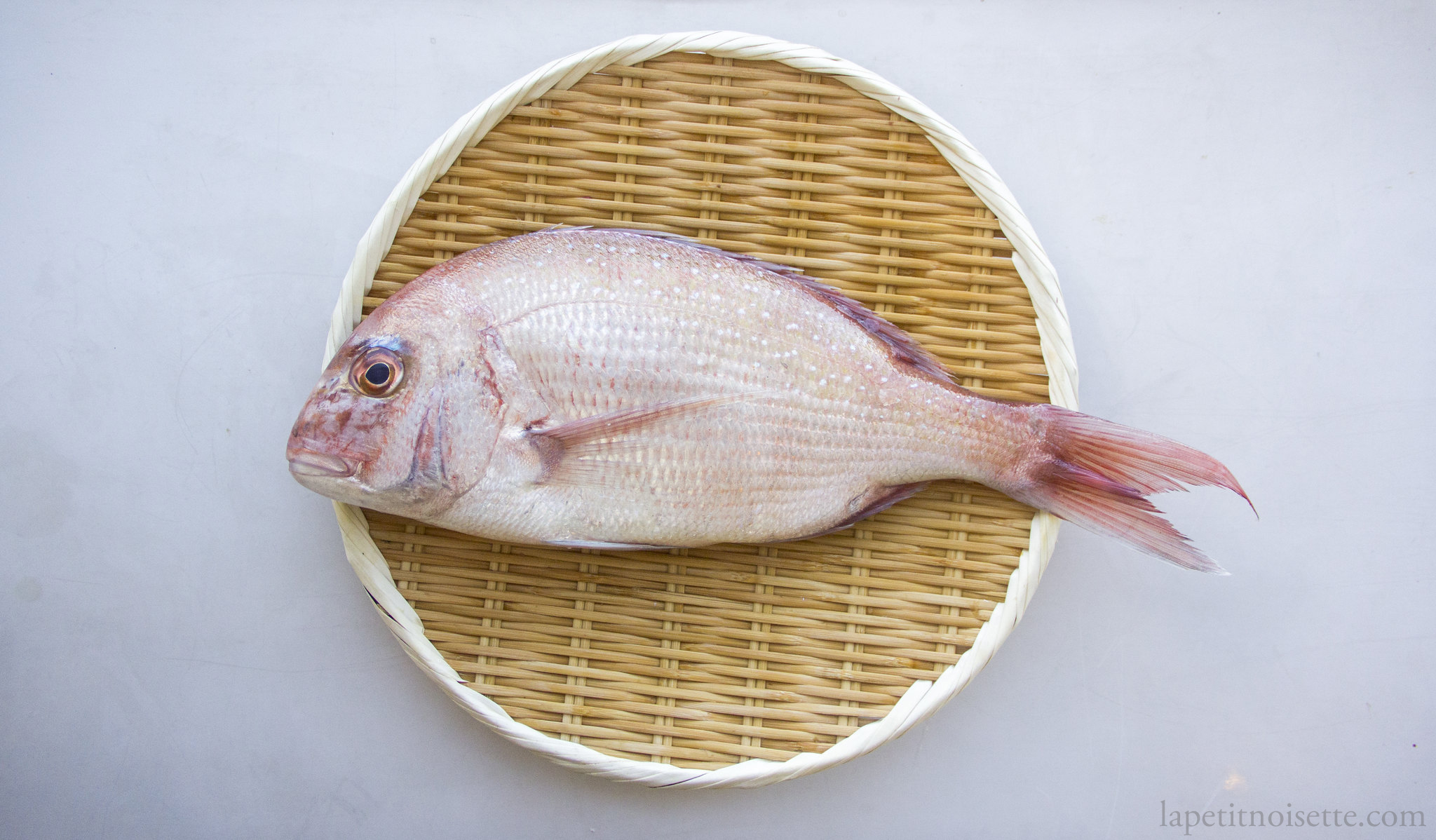 After descaling the fish, we remove the gills of the fish. Opening the gill flap, insert the tip of the knife into the gill cavity and cut the two ends of the gills connecting the arches. 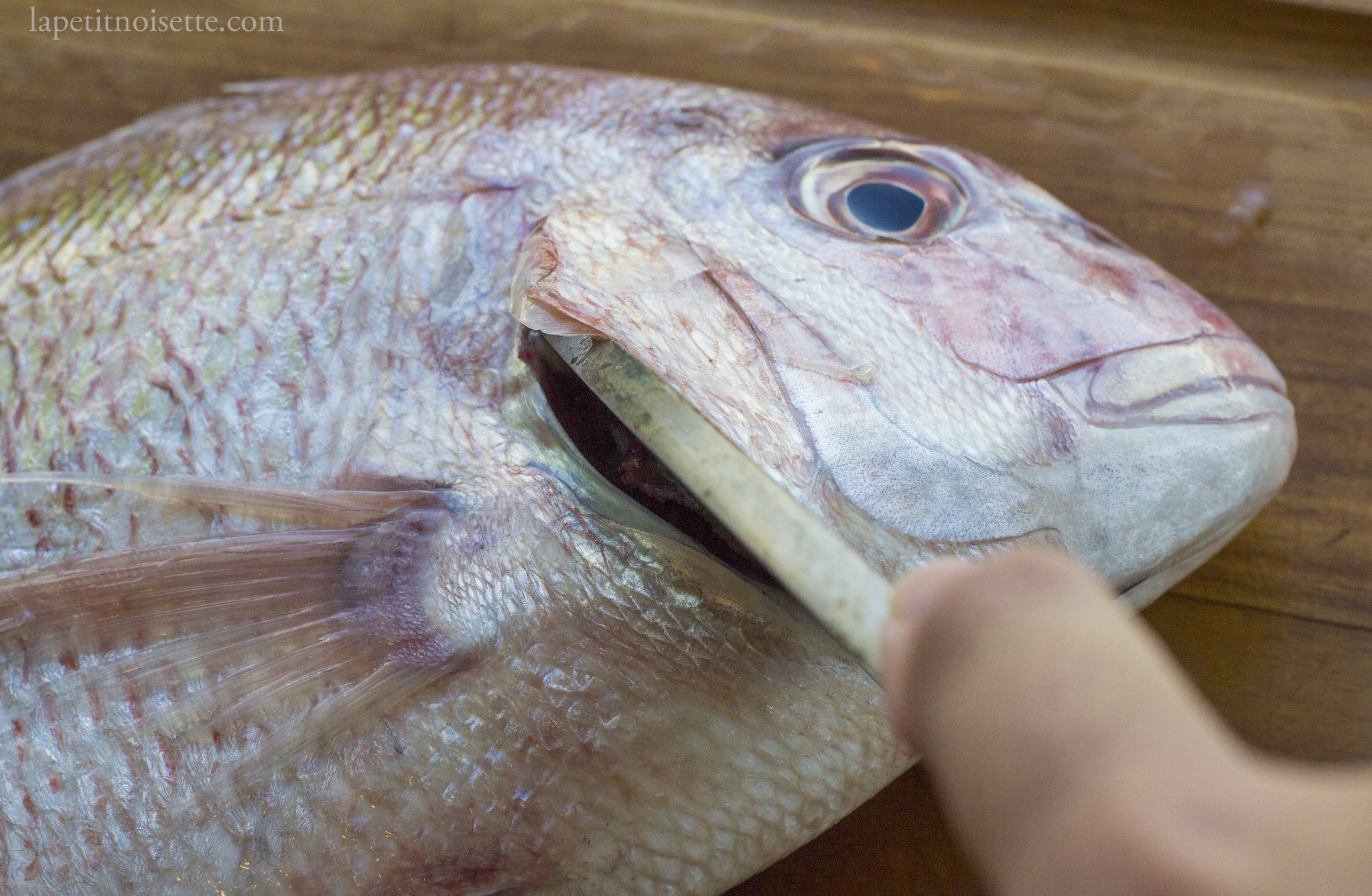 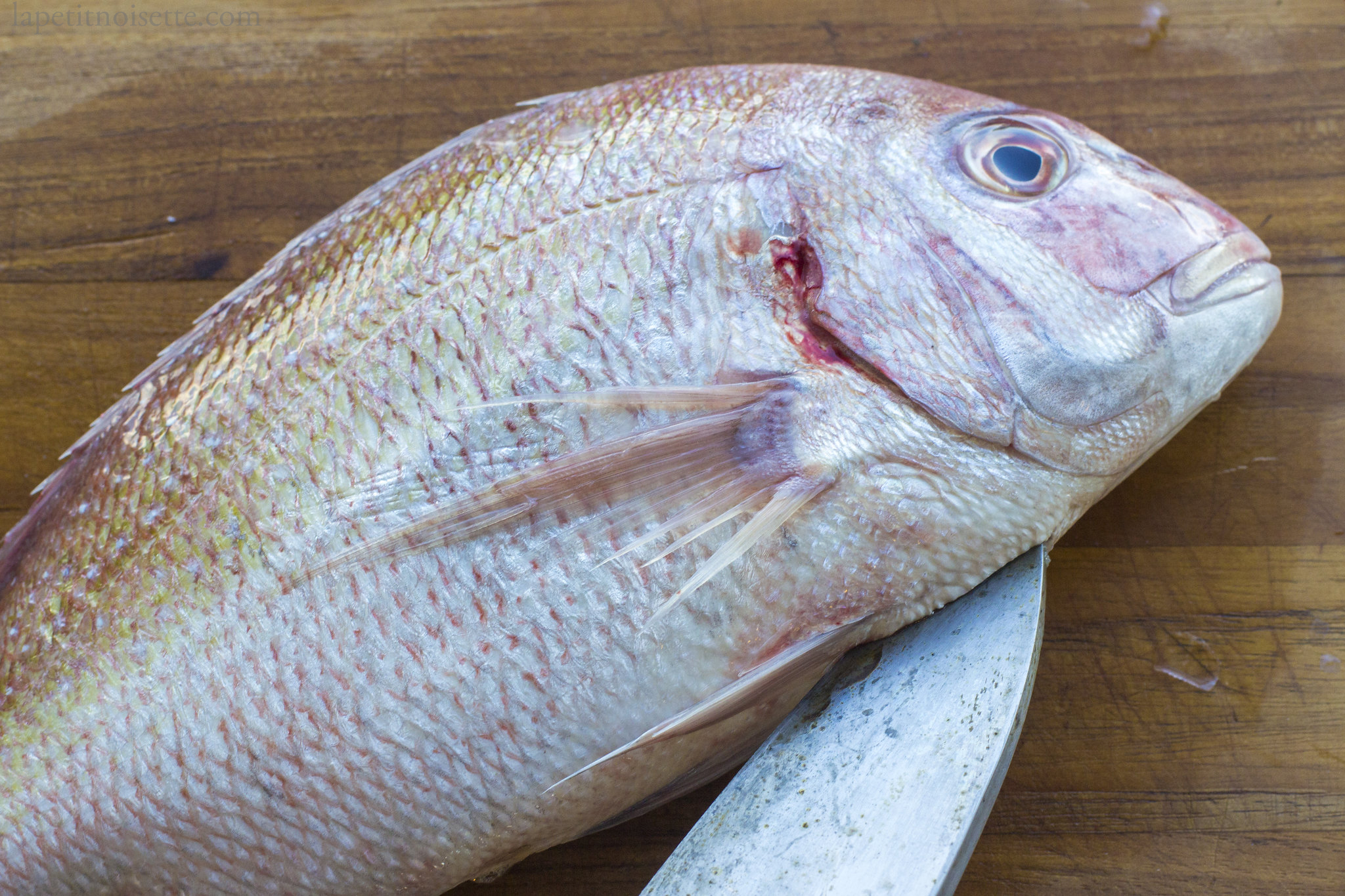 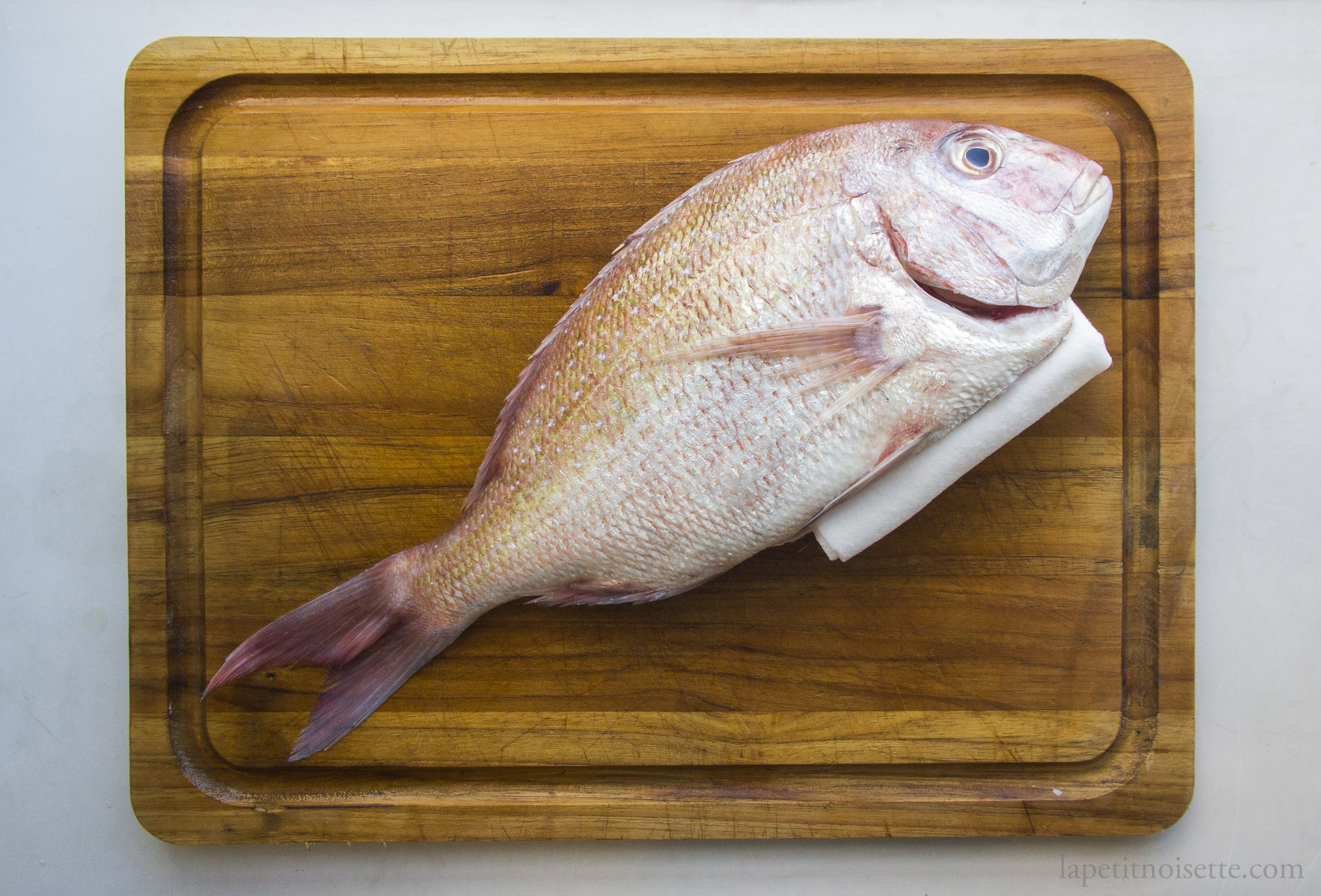 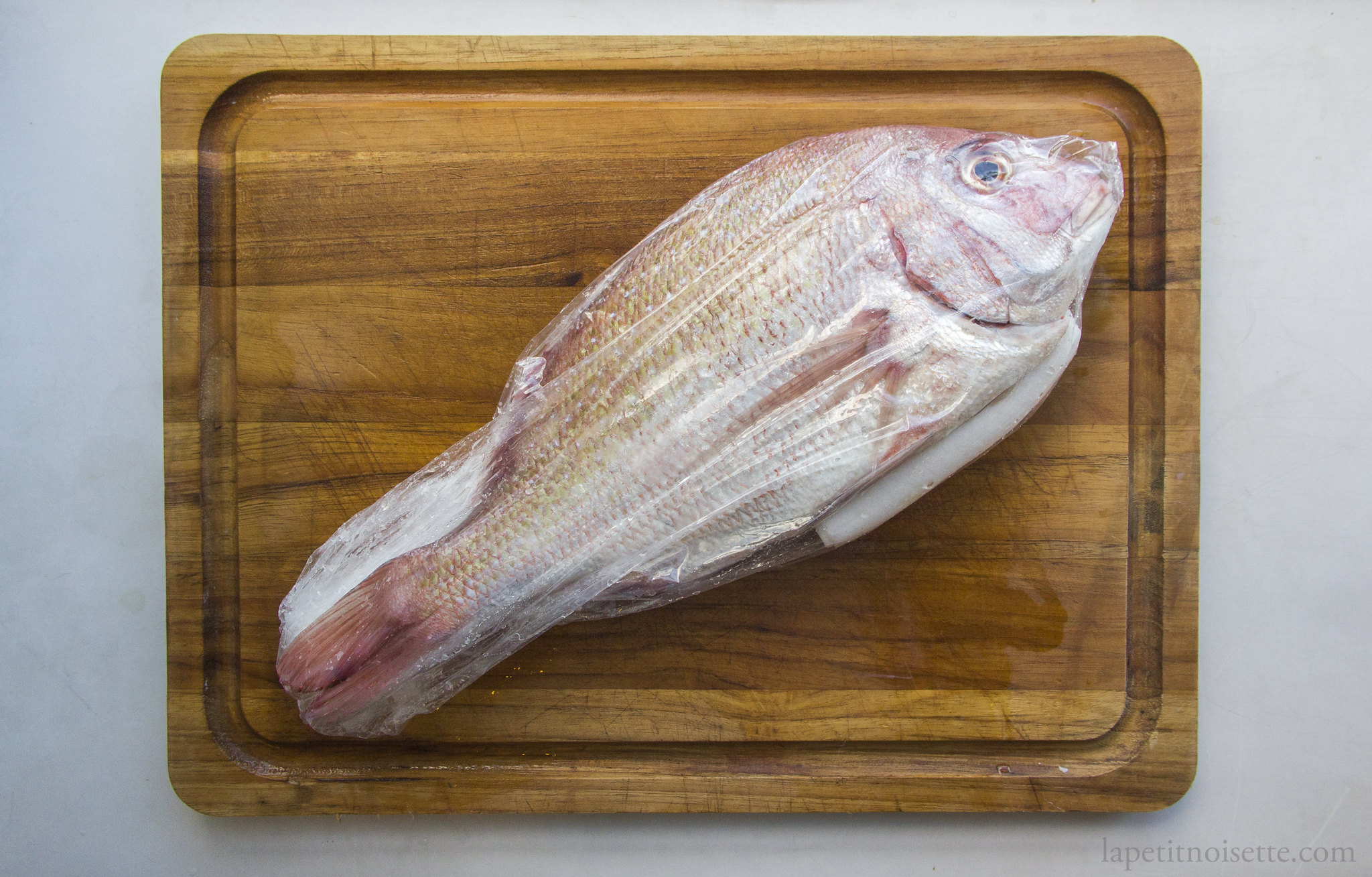 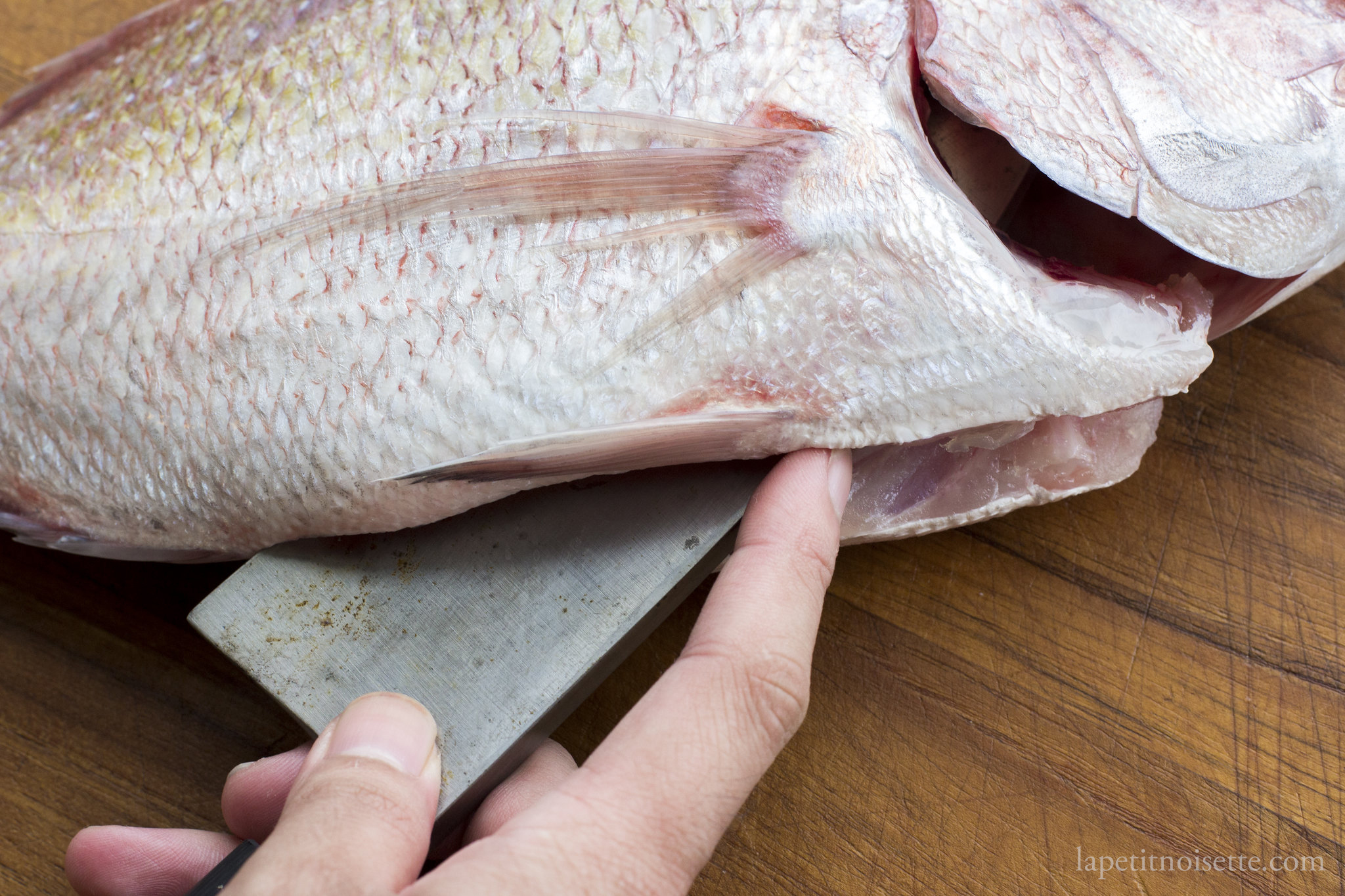 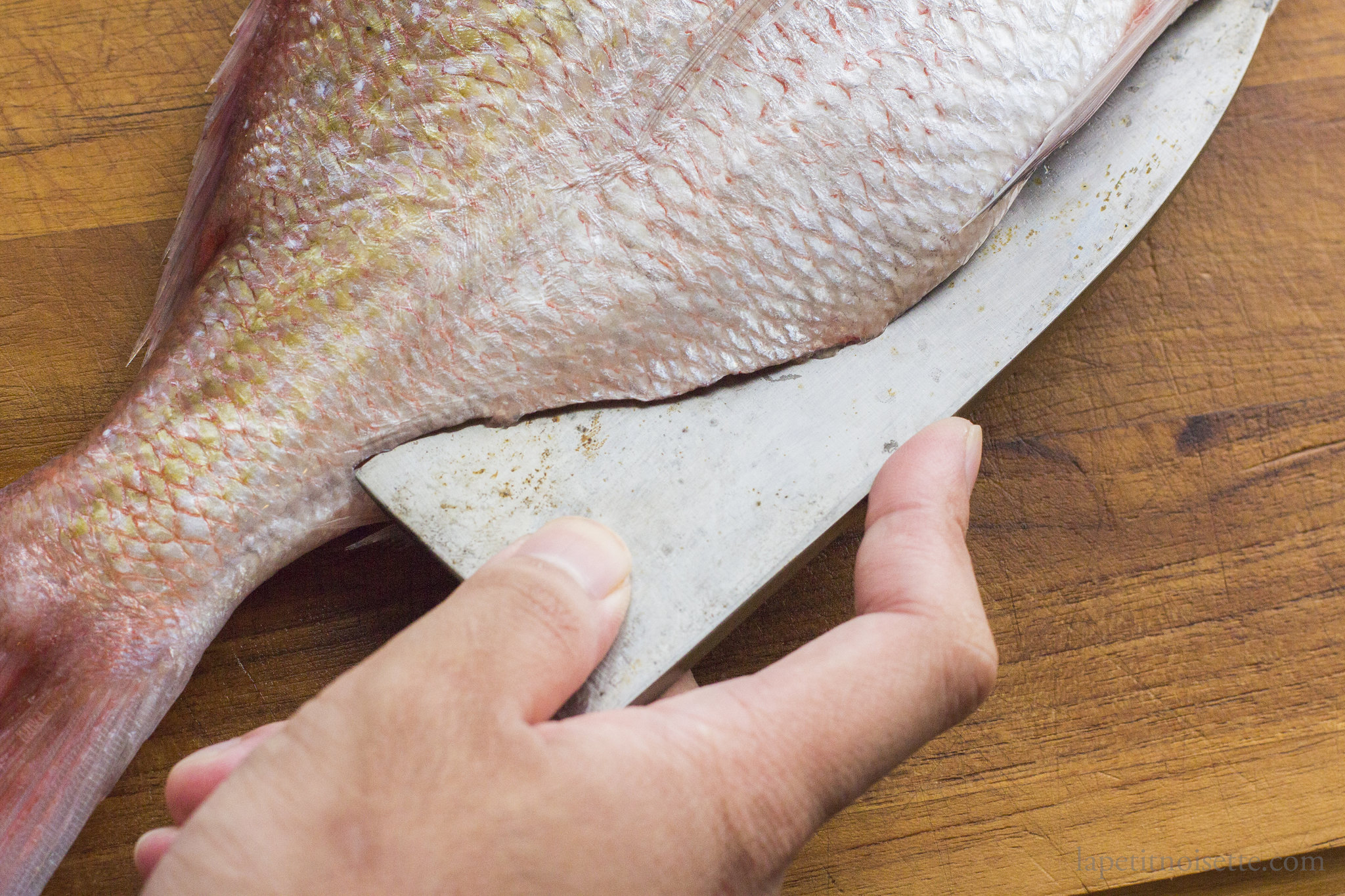 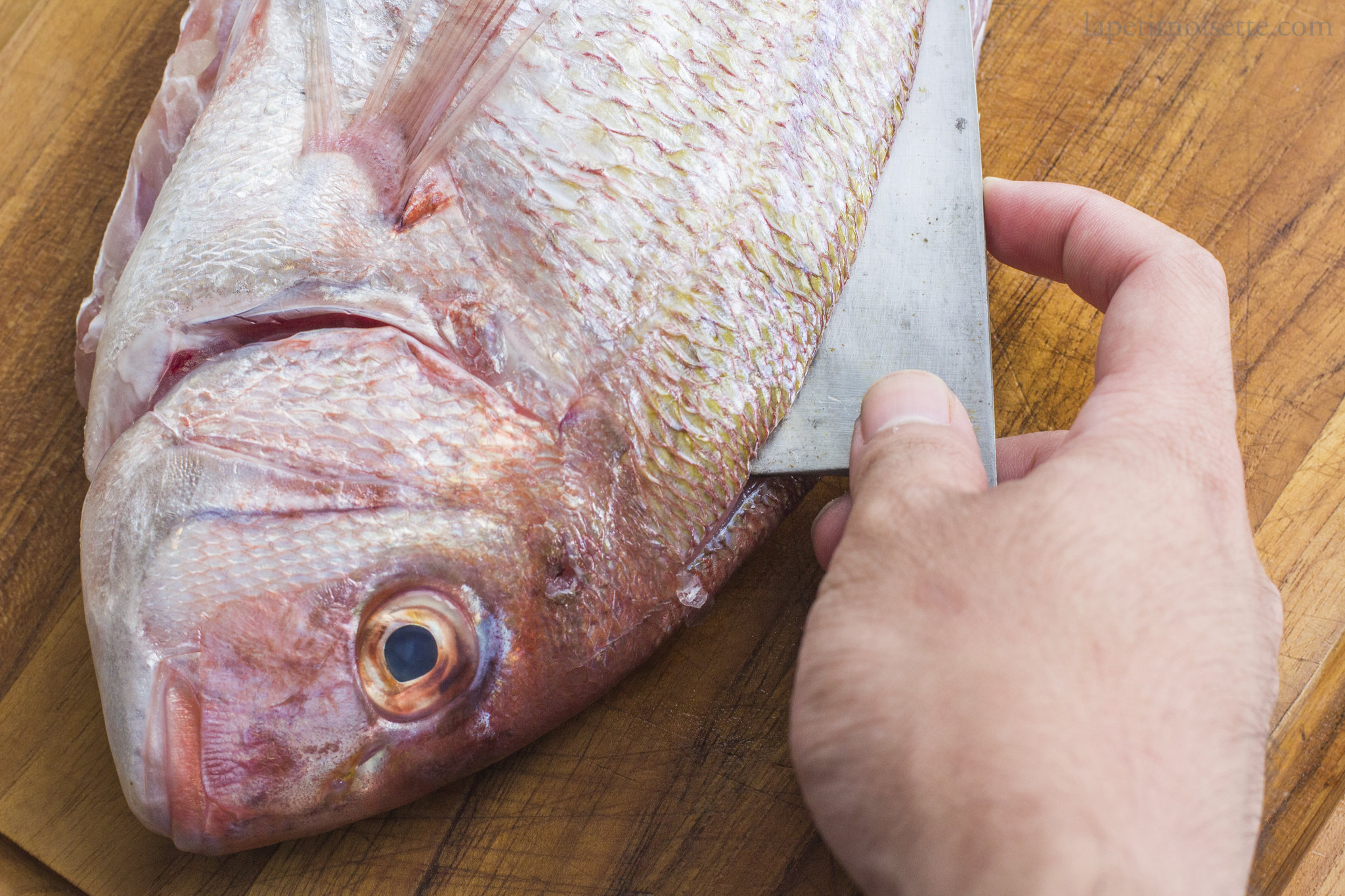 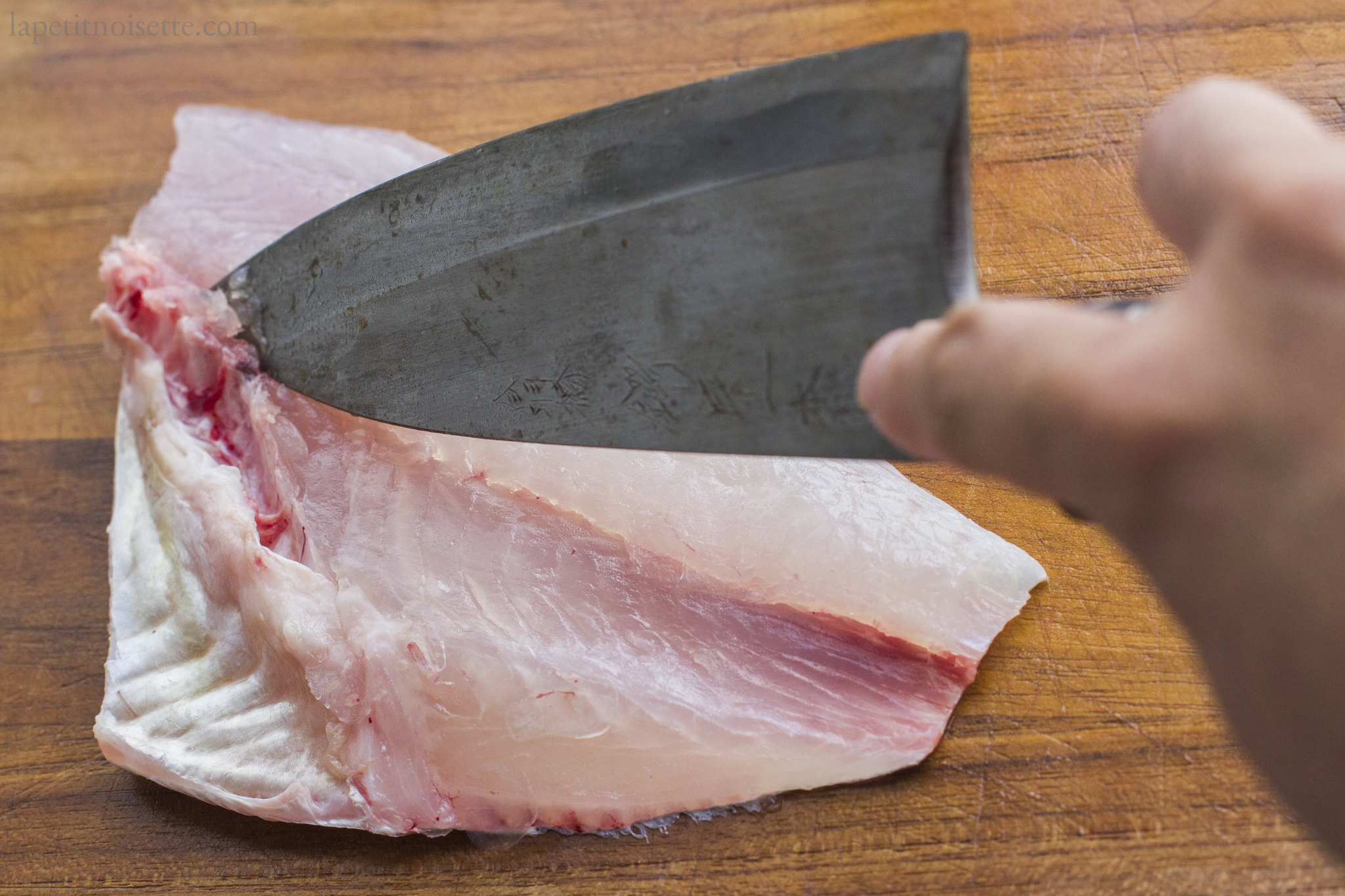 To finish preparing the Tai, repeat for the other side of the fish to extract another fillet. 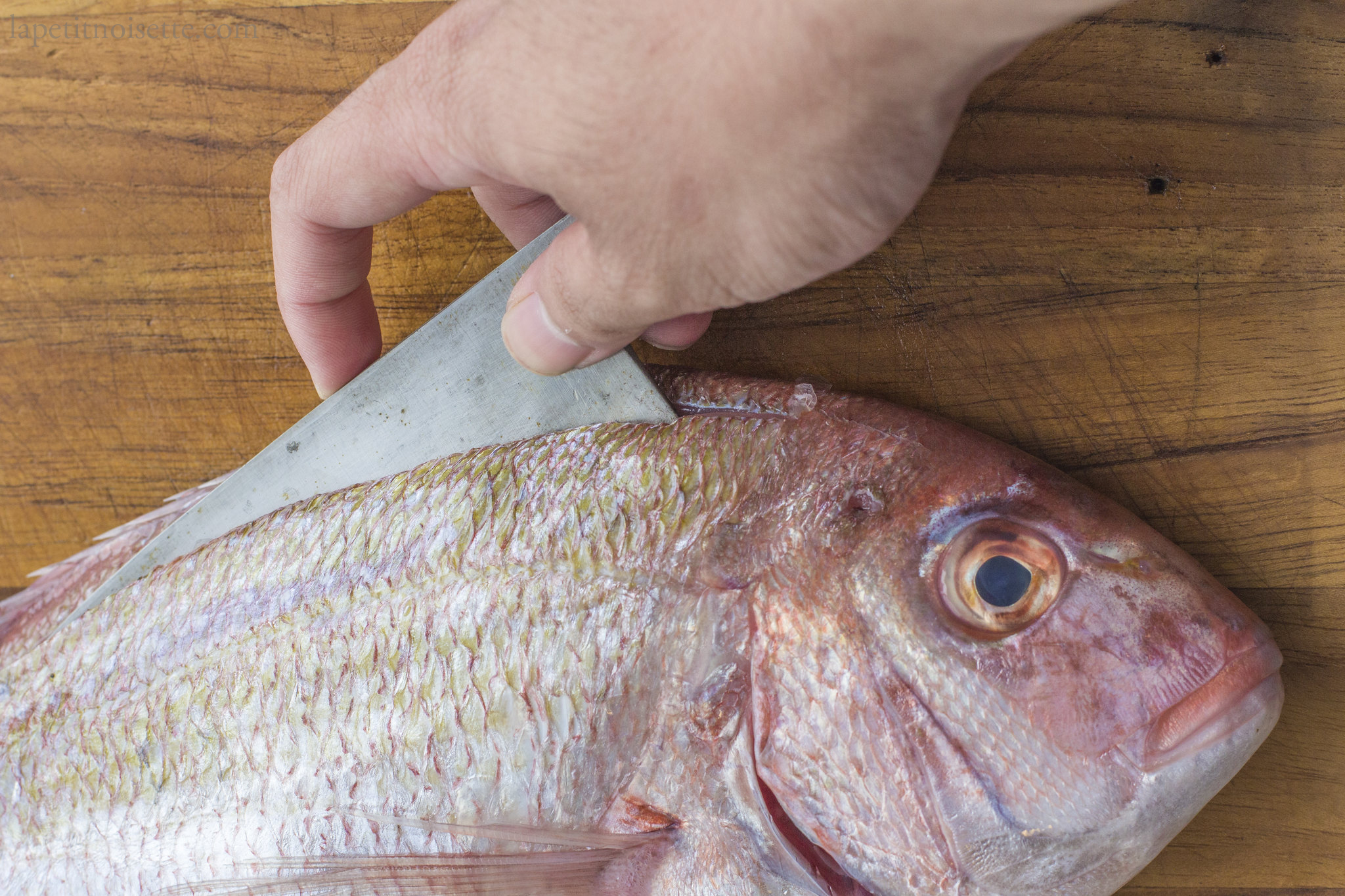 Generously salt a colander and place the fillets on a colander. Salt the flesh of the fish as well. In the example below, you’d notice that the rib bones were not removed from the fillet when salting. This prevents the fish from being over salted in smaller specimens. If the fish is large, remove the rib bones before salting. 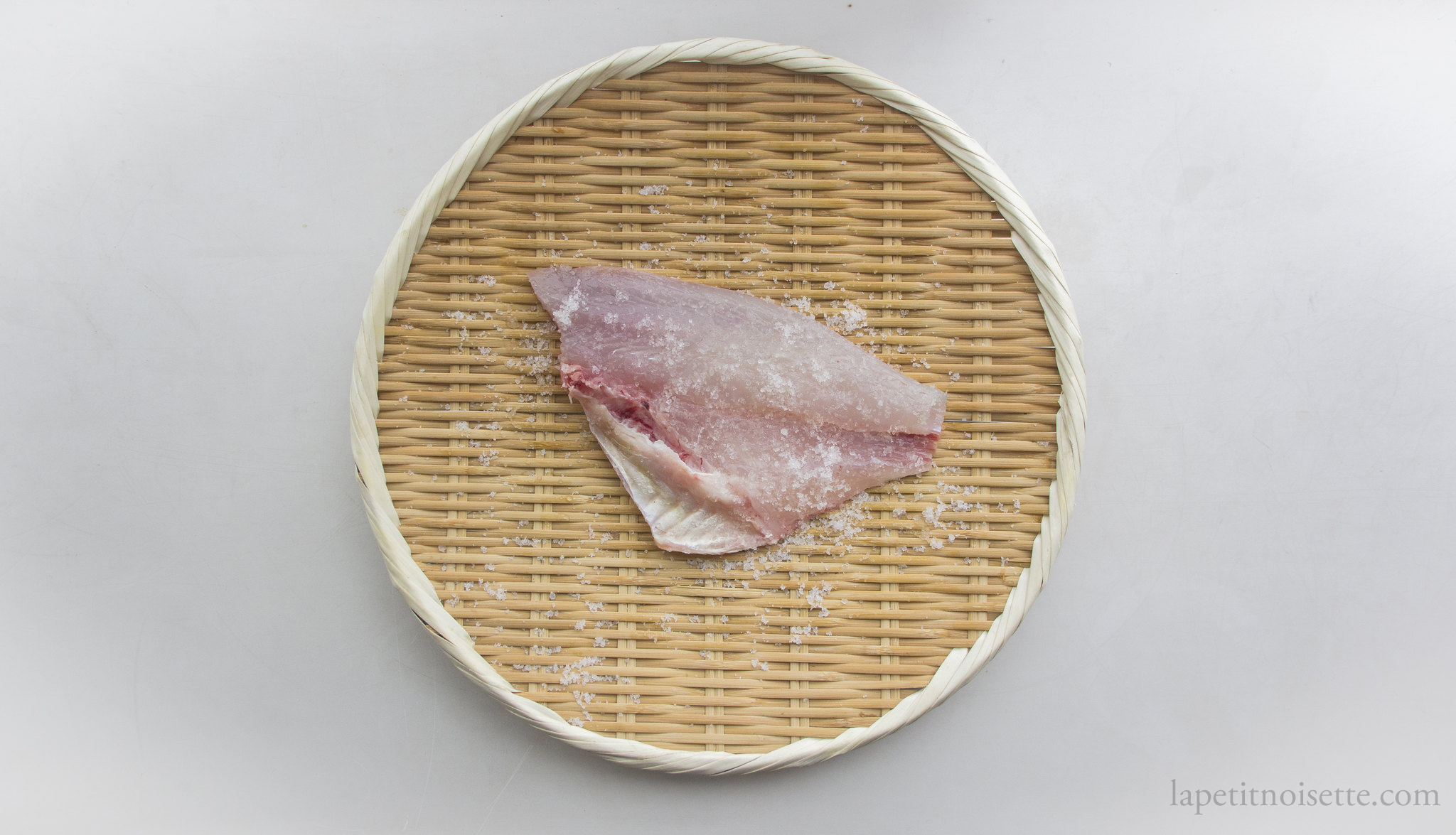 If making nigiri with the skin on, you have the option to either lightly grill it under a charcoal grill or use a technique called Kawasimozukuri (かわしもずくり/皮霜造り), more commonly known as Yubiki (湯引き), where boiling hot water is splashed on the fish before the fish is quickly chilled in ice. At our restaurant we never blowtorch (aburi/炙り) our fish as we feel that the smell of gas fumes can be imparted onto the fish.

To carry out the Kawasimozukuri technique, place a fillet on a colander skin side up.

Cover the fillet with a piece of paper towel or fish paper (Magu roll/マグロッ). 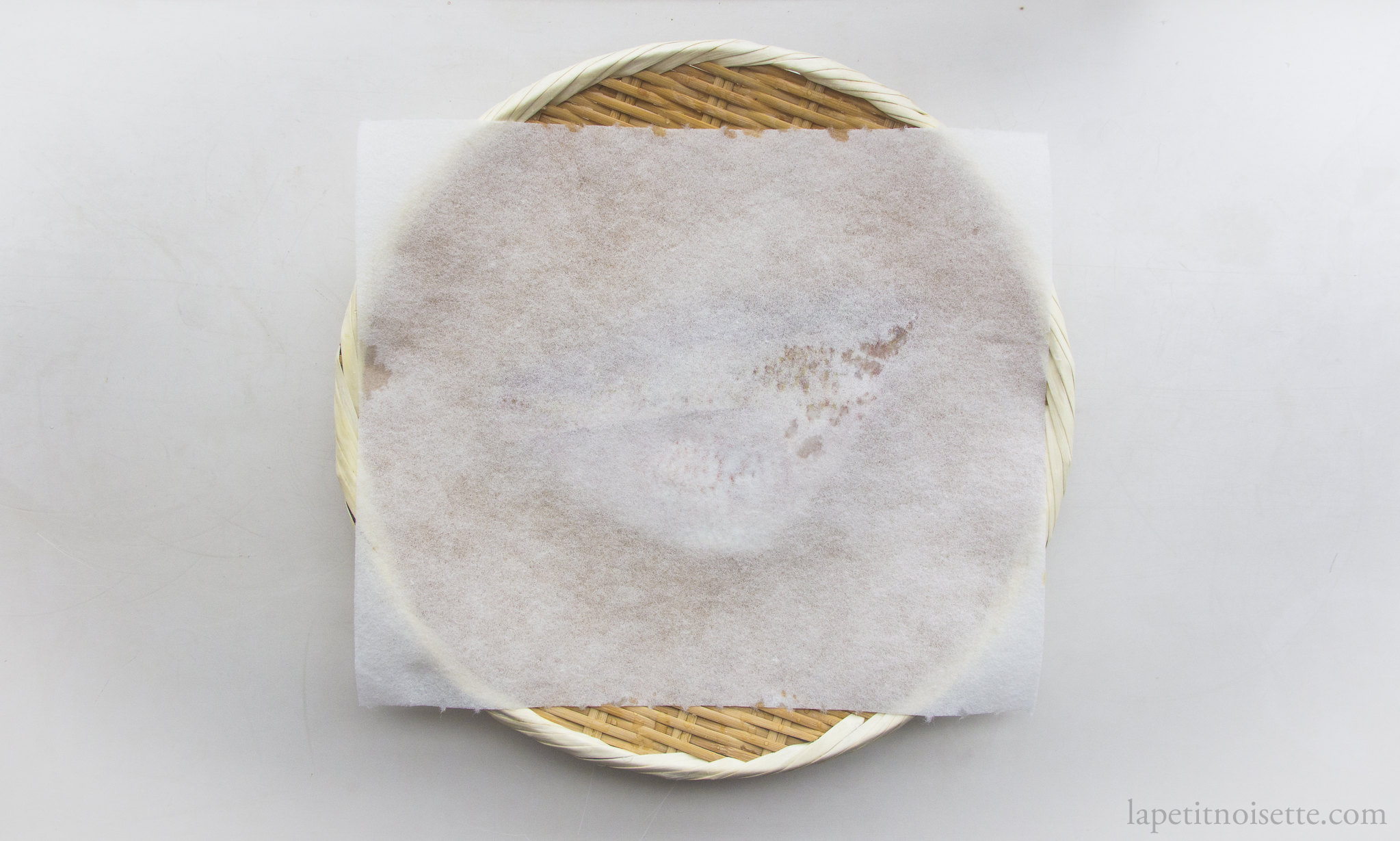 Place the colander over a wash basin. At the same time, bring a pot or kettle of water up to a boil. 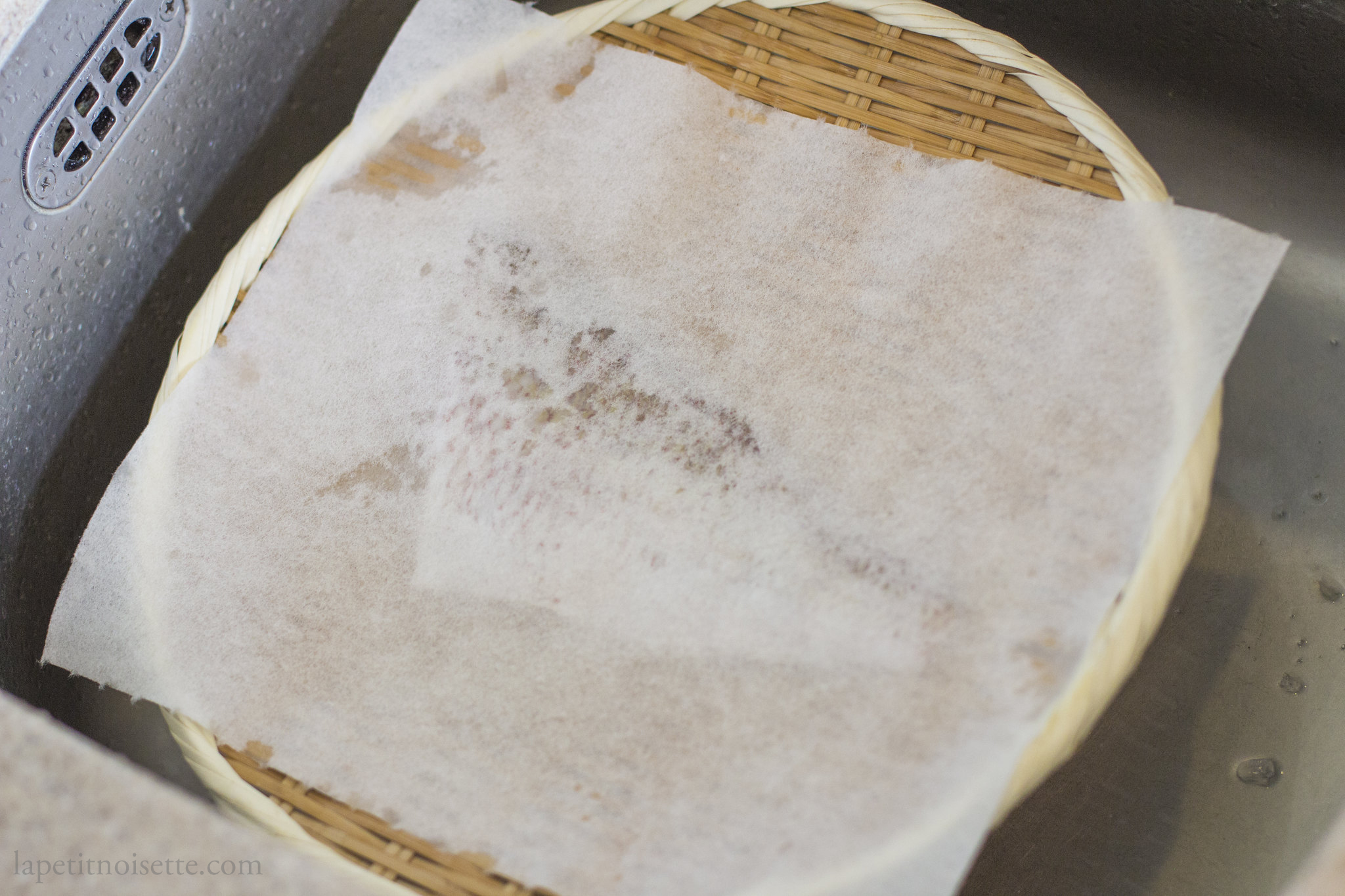 Ssing boiling water, quickly pour boiling water over the entire skin surface of the fish before quickly submerging the fish in an ice bath. During winter, the tap water may be enough to cool the skin down. If so just run cold running water on the fillet until cool. 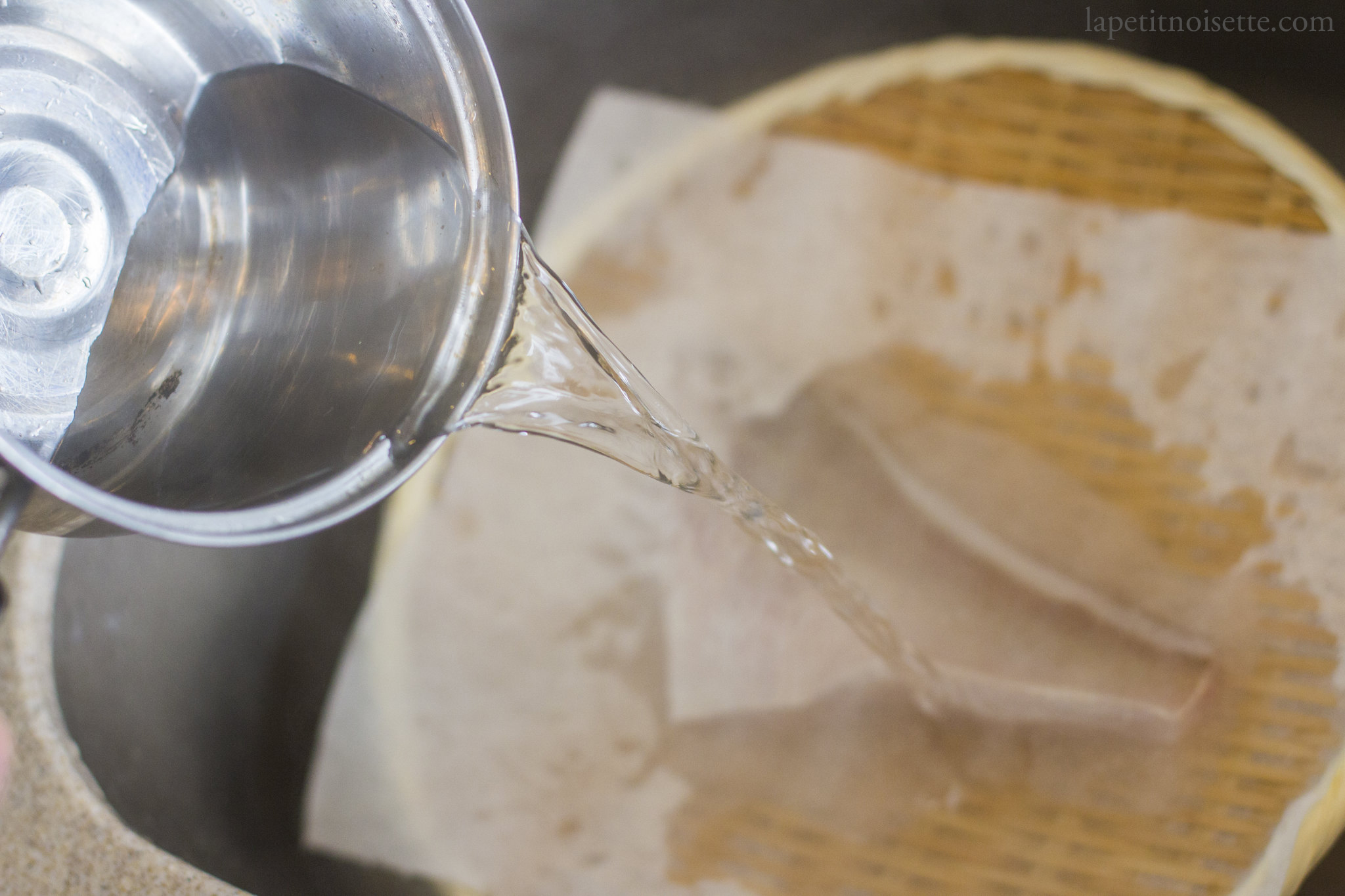 The fish is ready for consumption. 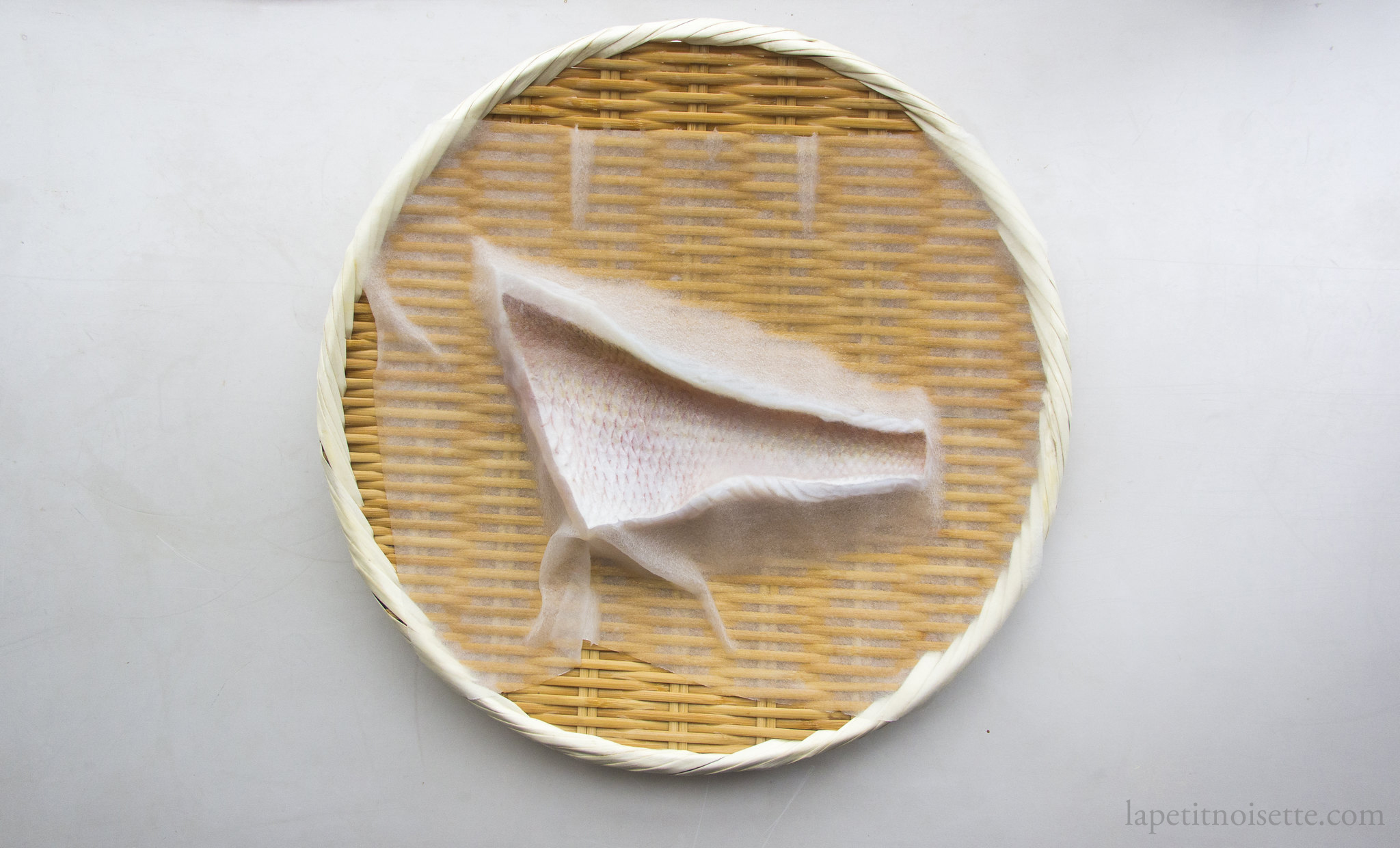