Another very traditional Edomae fish, Skipjack Tuna, or Bonito is a fish that is in season twice in Japan and is caught historically locally in Tokyo Bay. Just like Bluefin Tuna, Skipjack Tuna is migratory and swims around the Island of Japan before swimming off into the ocean. Katsuo that swims around Japan in spring before leaving on its migratory route is know as Hatsu (初) Katsuo, whilst Katsuo caught on it’s return from its migratory route during the autumn is known as Modori (戻り) Katsuo. Both types of Katsuo and symbolic of it’s own season, with the taste of Hatsu Katsuo being likened to the aroma of cherry blossoms in spring, and Modori Katsuo being likened to the aroma of chrysanthemum blooming during the autumn.

This analogy of course, is more symbolic than accurate. There are taste differences between both tunas however. Returning Modori Katsuo has accumulated fat for the on coming winter and has very a thick fat layer. Comparatively, leaving Hatsu Katsuo has been feeding in the rich waters around Japan and whilst not fatty, has a more complex flavour.

Most traditional Edomae sushi restaurants smoke their skipjack Tuna lightly using hay as just to lightly char the skin which otherwise would be too thick to eat. It also imparts a smoky flavour that pairs with the rich red flesh of the tuna, just like a steak cooked on a charcoal grill. In our restaurant however, we age our Katsuo for 3 to 4 days and serve it without smoking. This is because we want to showcase the high quality of our Katsuo. 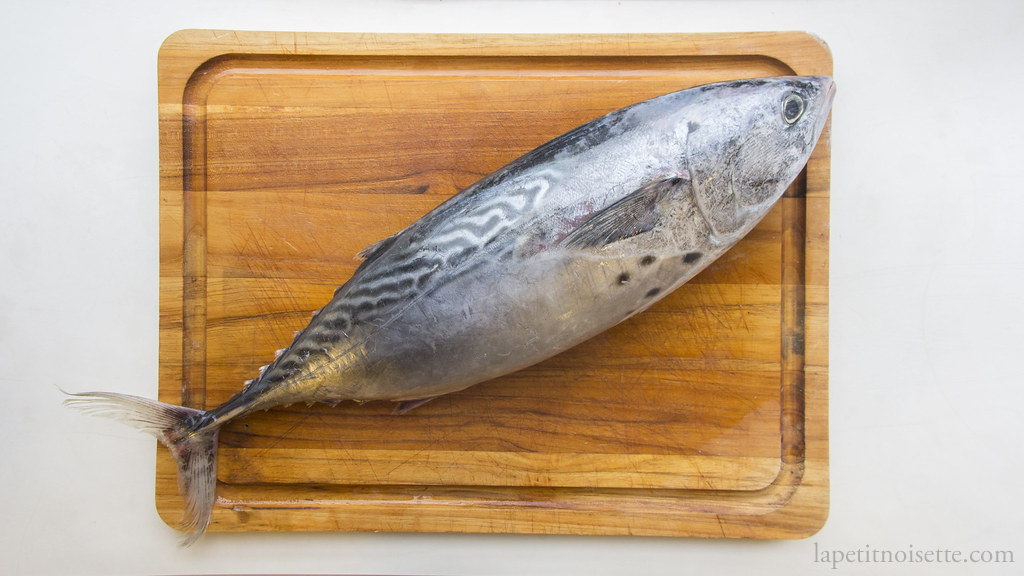 After washing the fish in cold water, start by remove the gills of the fish. Opening the gill flap, insert the tip of the knife into the gill cavity and cut the two ends of the gills connecting the arches.

Continue the cutting motion until the entire fillet is separated from the fish. Making an incision at the tail of the fish and cut off the flesh attaching the fillet to the head. You should be able to see some of the flesh having become brown from the ageing process, cut from these oxidised bits.

To finish preparing the Katsuo, repeat for the other side of the fish to extract another fillet.

Cut the fillet in half to make the Katsuo more manageable.