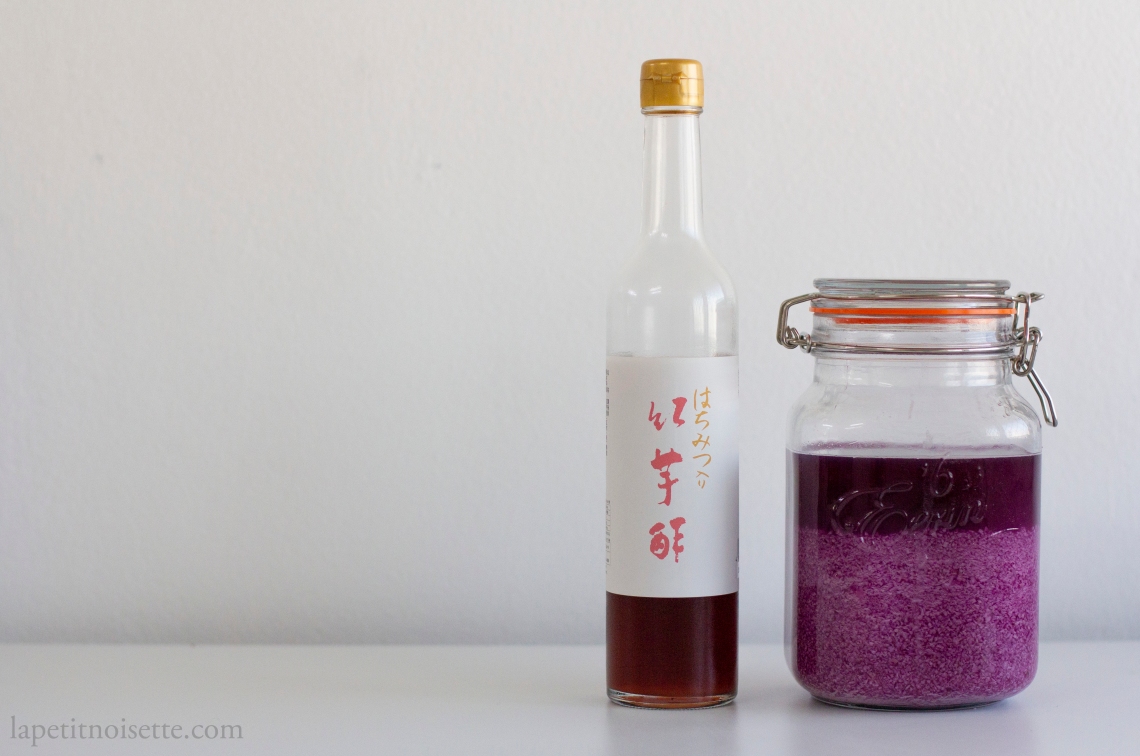 Akihiro Iio, is one of Japanese most respected and sought after vinegar makers. Based just outside of the main city of Kyoto, Akihiro Iio’s family vinegar house, known as Iio Jozo (富士酢), came to fame due to his grandfather’s commitment to producing 100% organic rice vinegars. Unlike other mass produced rice vinegars that typically ferment their vinegar in 2 days, Akihiro Iio is known to ferment his rice vinegar to up to 100 days! The koshihikari (こしひかり) rice variety that he also grows is polished down to the same level as you expect in a Junmai grade sake, meaning that every 1 litre of vinegar contains 200g of rice instead of the usual 40. He even makes premium version of this vinegar that contains 340g of rice (which I recommend when you try to make your sushi vinegar mix).

Already very hard to find within Japan, this vinegar is possible to source in the United States and the UK though online stores, but even then stock is limited. In addition to his standard purple sweet potato vinegar, he also makes a variation with added honey to balance out the earthiness.

Here, I try to recreate this divine vinegar to the best of my ability, using the knowledge of fermentation that I learn’t during my time at the Noma fermentation lab. But first, the science behind what’s going on!

How vinegar is made

The basics for creating vinegar is converting sugar (glucose) to alcohol, and alcohol to acetic acid. This acetic acid is what gives the vinegar it’s sour taste. In typical vinegars such as grape and apple vinegar, apple juice and grape juice already contains plenty of glucose so all you need to start the alcoholic fermentation is to add yeast (or let natural yeasts in the air start fermentation. As fermentation continues, the apple juice and grape juice will become alcoholic apple juice (apple wine) and wine (alcoholic grape juice). At around 15 to 16% alcohol, the yeast naturally die off due to their intolerance of alcohol. Next, acetic acid bacteria in the air starts to automatically convert this alcohol into acetic acid, which gives us apple vinegar and grape vinegar. Alternatively, vinegar mother can be added, which is basically a symbiotic disc which is a floating disc of cellulose and acetic acid bacteria (not unlike a kombucha SCOBY). Acetic acid bacteria requires oxygen to convert alcohol to acetic acid. For this very reason wine you buy at a store only starts to become vinegar after you have opened the cork (ignoring the small amount of oxygen than enters though the permeable cork that facilitates ageing).

In the case of potatoes however, both sweet potatoes and normal potatoes mainly consist of starch. What we call sugar or glucose, is a monosaccharide, which is derived from greek: mono- single, sacchar- sugar. Two glucose molecules can be combined together to form maltose, which is a disaccharide, which is also derived from greek: di- two, sacchar- sugar. A long chain of continuous sugars (carbohydrate) molecules joined together is known as a polysaccharide. Starch, as found in potatoes, are an example of a polysaccharide. Our tongues have receptors to detect mono- and disaccharides but not polysaccharides, which is why we find candy sweet but not rice and pasta.

On a side note, Maltose is the same sugar syrup that we use to make the Japanese version of roast pork used in ramen, Charshu.

Why are sweet potatoes sweet?

Whilst sweet potatoes and potatoes are both made from starch, sweet potatoes contain amylase, which is an enzyme that breaks down the long chains of starch into smaller simpler carbohydrates such as maltose and glucose. Enzymes takes time to breakdown these starches, and is sped up with heat. This is why, raw sweet potatoes don’t taste sweet, even if you peel them and leave them out for a long time. This also explains why oven roasted sweet potatoes are much sweeter compared to deep fried sweet potatoes, due to the longer roasting time.

For this very reason, the sweet potatoes need to be steamed before we start converting them into vinegar, as it helps breakdown start into glucose. 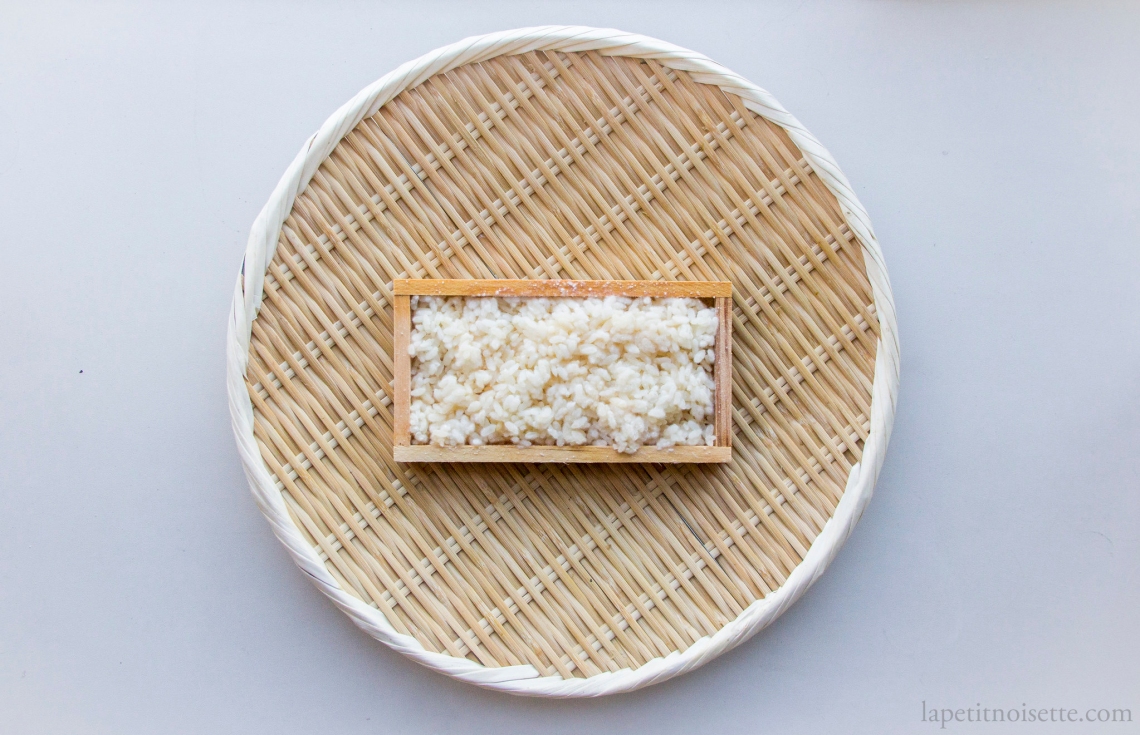 The use of Koji (Aspergillus oryzae)

A lot of the ferments that I used to make at Noma made use of Koji in order to speed things up. As Koji is traditionally used to make sake, it is no surprise that Iio Jozo himself adds precisely 10% of the sweet potatoes’ weight in Koji to his steamed purple sweet potatoes when making them into vinegar. The Koji is first grown on steamed rice in order to allow it to multiple, increasing the amount of glucoamylase and alpha amylase present. These amylases work together with the natural amylases in the sweet potatoes to breakdown starches into glucose. When mixed into the steamed potatoes, the Koji eventually dies but the enzymes from the Koji continue to breakdown starch.

For this recipe you’ll need 10% of the sweet potatoes’ weight in Koji, grown as instructed here.

The next step in the process is alcoholic fermentation, where the available sugar (glucose) is converted into alcohol by yeast. There are many different kinds of yeast, and not all of them give you the same results. Brewers yeast, which is used for bread or beer making, is not suitable to be used in this recipe, as it gives the resulting wine a bread-like off flavour. I actually tested this out with a batch of sweet potatoes. The resulting wine was had an amazing banana-esque smell, similar to miso banana bread, however, the resulting vinegar was far too pungent. Whilst wine yeast is probably the most suitable choice for you to find. The final yeast that I went with was sake yeast, or Seichu Kobo (清酒酵母). I believe that the specific strain that I used was similar to Kyokai #9 from Kumamoto but I was unable to confirm this fact. Whilst beer and red wine are typically fermented at around 30°C and 20°C respectively, Sake is typically fermented at lower temperatures, sometimes as low as 0°C, as to produce the most gentle and pure aromas without any off-flavours. 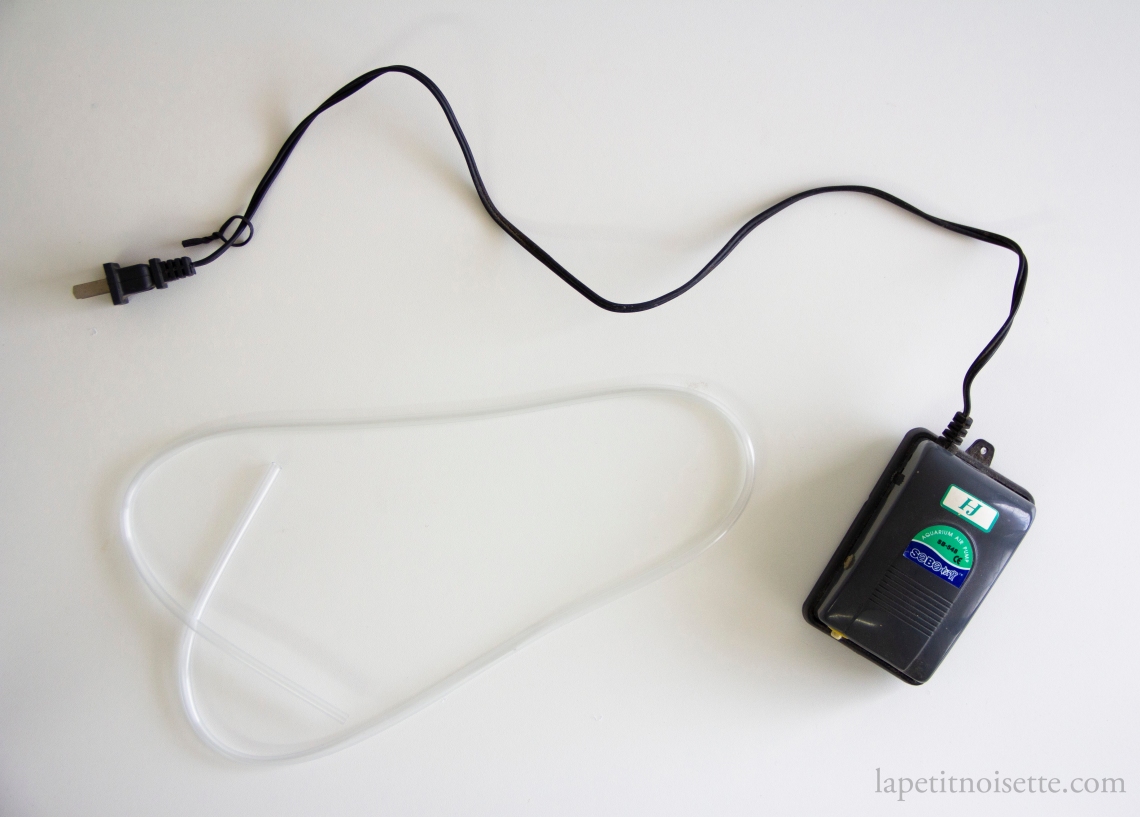 As mentioned before, the conversion of alcohol to acetic acid requires oxygen. When fermenting vinegar in traditional barrels, the barrels themselves are permeable to oxygen and thus supplies enough oxygen to keep the transformation going. To speed up the process however, it is possible to use a simple cheap aquarium pump to aerate the liquid with oxygen, thus speeding up the process. Whilst you typically wouldn’t do that when trying to make thick and viscous vinegars as this basically skips the ageing process. I feel that in this particular case it is still justified as this vinegar is rather light and aromatic in style, without the aged characteristics we associate with a good balsamic vinegar.

As the vinegar ferments and oxidises, the purple liquid turns into gorgeous bright red colour. Which is the same colour of the final product being sold, which was a hint that I was on the right track.

The first thing I did when starting the project was to grab the original vinegar made by Iio jozo and start reading the back label. The back label stated the obvious, which was that the vinegar is made from water, purple sweet potatoes, rice and honey (for the version with added honey). This is typical for Japanese labels which almost never mention when they have used Koji in the mixture (only rice is mentioned). The main interesting thing to note on the back label was this: “オりたまるにとがありますが品質には問題ありません”, which roughly translates to some sediment might appear to collect on top of the vinegar but there is nothing wrong with the product. 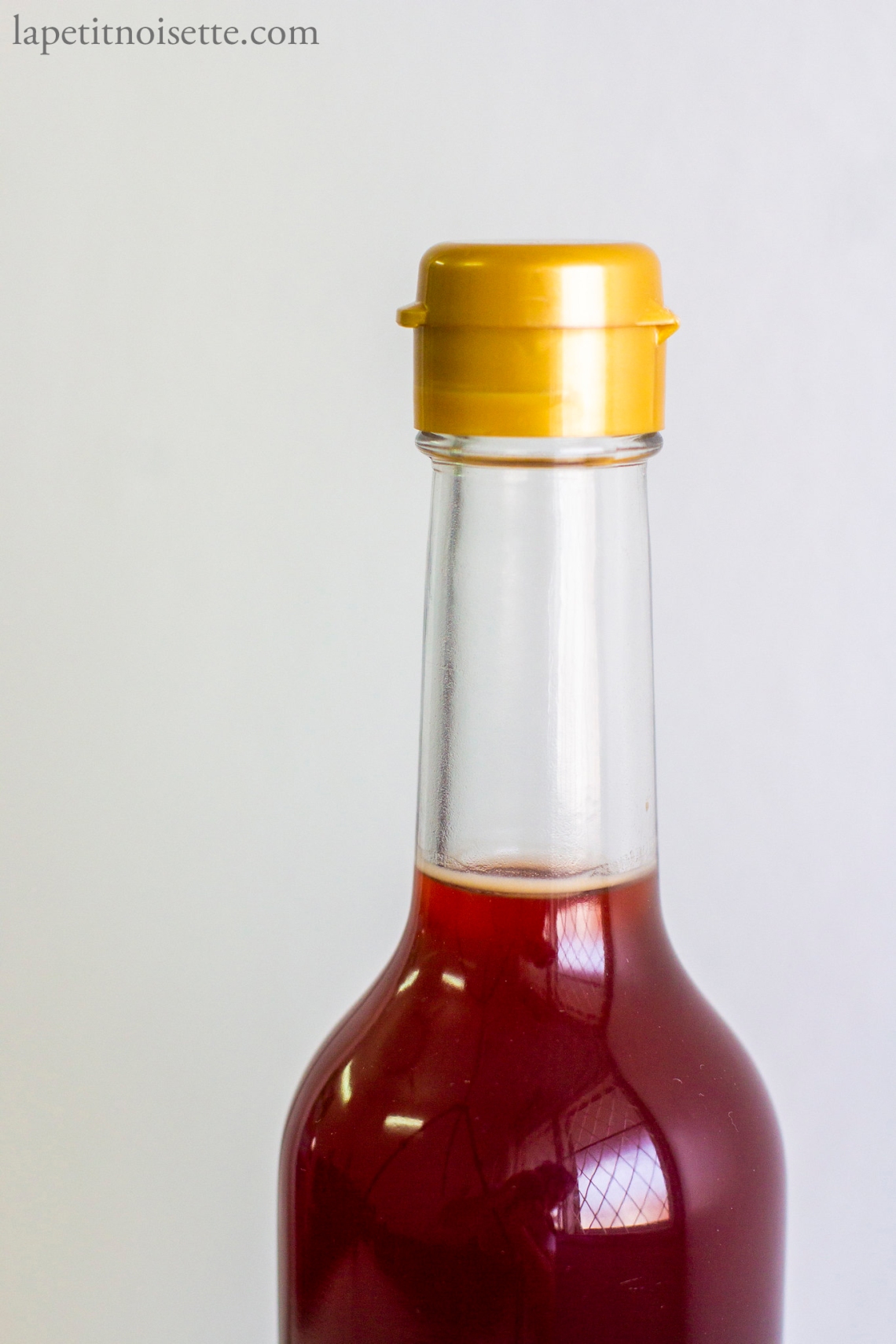 In Tokyo, I went from store to store looking for a bottle of this vinegar that had the this disc of stuff gloating on top. My guess was that the stuff that develops on top of the vinegar is most likely baby vinegar mother, which lead me to believe that the vinegars might not be fully pasteurised before being bottled, or may be only low temperature pasteurised. I had been trying to find out about this the whole time as I was wondering if it would be possible to inoculate my vinegar with some of the original vinegar, thus transferring over some of the original acetic acid bacteria from Iio Jozo’s vinegar house (I have been unable to confirm if it is really unpasteurised vinegar but my best guess is that it isn’t).

In Japan, purple sweet potatoes are a specialty of Okinawa Prefecture (沖縄県) but I don’t think they are grown exclusively there in the Japan. Iio Jozo himself claims he uses locally grown organic sweet potatoes in his vinegar, and seeing that Kyoto is so far away from Okinawa, I doubt that he himself ships his potatoes from so far away.

When making this recipe yourself, I do know that these purple sweet potatoes are available in America, the UK and Vietnam, as Vietnam actually grows a lot of agricultural products and ships them to different countries, including Japan, the UK and the US. Australia also has their own variety of this sweet potato which is essentially the same but only with a whiter outer skin.

Equipment you will also need:

The longer you ferment the potatoes the higher the alcohol content but the less sweet your final vinegar will be. I suggest starting to taste the potato wine after 4 to 5 days and continue to taste it every day until you feel it has reached the right stage of fermentation you want. To make the vinegar closely resemble the original one as possible, you probably need ferment it for over 10 days until there is very little sugar left, as his vinegar is very dry. This is because he then sweetens it with honey.

An air stone just helps to convert the giant bubbles from the bubbler into tiny ones, thus helping the aeration process. It is not 100% essential. You want to cover the vinegar to prevent fruit flies from getting in but you don’t want to totally block oxygen from entering, which is why covering it with a towel and muslin cloth with a rubber band is the most effective.

Lastly of course, basic common sense is important here. If it looks mouldy or smells bad, then it probably isn’t fermenting right or has been contaminated. Don’t consume anything that you typically wouldn’t.

In the pictures above, you can see that I didn’t strain out the solids after the alcoholic fermentation before proceeding with the acetic acid fermentation. I recommend you do because it makes for a much cleaner and less messy fermentation. It also produces better results from my experience.

Iio Jozo himself makes a variety of this vinegar that has honey added to it. I haven’t found any information anywhere as to which stage of the process the honey was added to the vinegar, but from the smell and taste of it, the honey doesn’t seem to have been fermented in any way and just added at the end. In my case, I was supplied an amazing batch of wild forest Kelulut honey from Malaysia which I then added to taste into my finished vinegar.

After many batches of this vinegar and many reiterations, I feel as though I have come quite close the recreating it even though I must say that due to the fact that I only ferment it for 14 days with a bubbler compared to ageing it slowly in a barrel with natural oxygen in the air, the taste profile of the vinegar is slightly lighter and is not exactly the same. If one were to want to completely recreate it exactly, you’d need a lot more patients and time on your hand to allow it to slowly mellow though natural ageing.